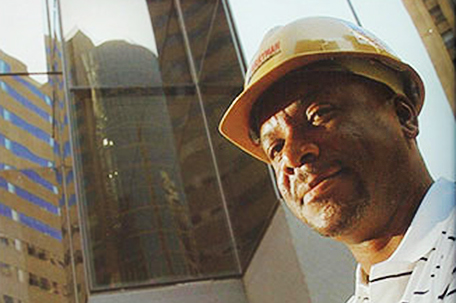 ABOVE PHOTO:  Angelo Perryman, Pres. and CEO of Perryman Building and Construction stands next to the Comcast Building in Center City.

Local, African-American-owned company has record for Excellence in Construction

“Perryman Building and Construction is known not only for quality construction work, but also for being a leader in the community,” said Rev. Leah D. Daughtry, CEO of the DNCC. “I know they will be a strong partner in turning the Wells Fargo Center into the Convention Hall. This construction contract will help our Convention remain on time, on task and on budget.”

Perryman, an African-American owned firm that utilizes union contractors, joins three other major convention contracts that have been awarded to diverse companies thus far. The company was selected  after responding to a Request for Qualifications developed and managed by Hargrove, Inc. a certified woman-owned business.

“It is an honor to be a part of Philadelphia’s Democratic National Convention, and we are excited for the opportunity to build the convention from the ground up in our own backyard,” said Angelo Perryman, President and CEO of Perryman Building and Construction Services.

Further convention contracts will be announced in the coming weeks.