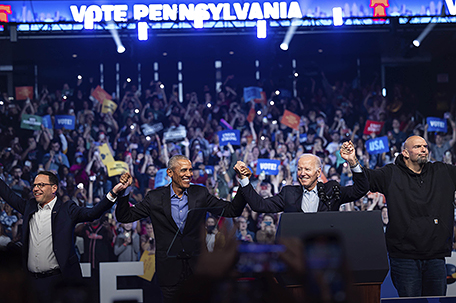 Thanks to wins in Pennsylvania and around the country, Democrats had a historic midterm election on Tuesday.

Conventional wisdom says that the party whose standard bearer occupies the White House does a whole lot of losing when it comes to the midterm elections.

From governors’ offices to the halls of Congress, the members of the incumbent president’s party often find themselves crying in their beer by the end of Election Night. And the president himself? He prepares for two stressful and unproductive years of gridlock.

But the results of Tuesday night’s midterms gave Democrats in Pennsylvania and around the country a lot to cheer about. Instead of the major losses that were expected, there were a lot of big wins as races that were expected to take days to verify were called on election night.

Attorney Gen. Josh Shapiro will be replacing a term-limited Tom Wolf in Pennsylvania’s governors’ mansion thanks to a resounding win on Tuesday night. Shapiro bested Republican State Sen. Doug Mastriano by more than 700,000 to win the office.

At his election night party at the Greater Philadelphia Expo Center in Oaks, Montgomery County, Shapiro thanked his supporters for honoring his vision that takes all Pennsylvanians into account with their votes.

In a race that asked Pennsylvanians to choose what kind of commonwealth they wanted to live in, Shapiro expressed gratitude to voters for deciding on a more progressive vision for Pennsylvania’s future.

“Tonight, you won,” he said. “Opportunity won. A woman’s right to choose won. The right to organize here in Pennsylvania won. Your right to vote won. And in the face of baseless conspiracies, you showed that the truth won.”

“I’m so humbled,” Davis said. “From the bottom of my heart, thank you. I can’t put into words what this moment means for me and my family. I’m grateful for this opportunity, but the road was paved by those who came before me.”

Through winning the office, Davis becomes one of only two Black row-office holders in the Commonwealth’s history, the other one being Republican Auditor General Timothy DeFoor.

But Shapiro wasn’t the only Democrat that had a big day in Pennsylvania on Tuesday.

Because this race will have an impact on whether or not Democrats maintain control of the United States Senate, no expense was spared when it came to this seat. So-called “dark money” groups poured millions of dollars into issue ads that either depicted Fetterman as a radical socialist that wanted to empty the Commonwealth’s jails or Oz as a rogue conservative that wanted to accompany Pennsylvania’s women to their gynecological appointments.

It also became a referendum on disability, and how America views it, due to Fetterman’s recovery from a stroke he had prior to the primary election in May. Oz, a retired cardiothoracic surgeon who had taught at the Columbia School of Medicine before being discovered by Oprah Winfrey and brought to television, used the stroke as a campaign issue and even as a source of derision.

Oz conceded the race to Fetterman early Wednesday morning. As it looked like the race was about to be called for Fetterman on Tuesday night, reporters were ushered out of the doctor’s election night party in Newtown, Pennsylvania.

Throughout the campaign, because of Pennsylvania’s status as a so-called “swing state,” heavy hitters came out on behalf of both Shapiro and Mastriano. Florida Gov. Ron DeSantis, who easily won re-election over Democrat Charlie Crist on Tuesday, came to campaign for his Republican colleague. While DelRosso was technically Mastriano’s running mate, they didn’t campaign together often, unlike Shapiro and Davis.

Former President Donald Trump also paid Pennsylvania a visit for a rally on behalf of  Oz and Mastriano. Only two of the candidates endorsed by Trump were successful in winning their seats. The others, which included Oz and Mastriano, went down to defeat on Tuesday.

Rank and file Republicans, including Toomey, said it was time for Republicans to sever their ties with Trump and to gravitate more toward people like DeSantis, according to an interview Toomey did with the Philadelphia Inquirer on Wednesday.

Right now, the control of the federal House and Senate are still up in the air. Races in Colorado, Nevada, Arizona, and Oregon are all still considered too close to call.

But because of better turnout than the Commonwealth usually gets in a midterm, one of the Houses of the Pennsylvania legislature may be changing hands.

As of Wednesday, the Associated Press called 195 seats decided and gave Democrats a slim advantage. There are eight seats that were considered too close to call as of press time and control of the House would likely come down to five seats, according to the AP.

But while Republicans see it as being premature, House Minority Leader Joanna McClinton and her caucus are already preparing an agenda for the Democratic House.

Should the vote totals remain in favor of the Democrats, McClinton would become the first woman to serve as speaker of the House in Pennsylvania. K. Leroy Irvis of Allegheny County became the first Black speaker of the House in 1977, replacing retiring Rep. Herbert Fineman, and served until 1978.  Irvis was re-elected in 1983, where he served until his retirement in 1988.

The results of the November elections will be certified on Nov. 28.

Up in the air