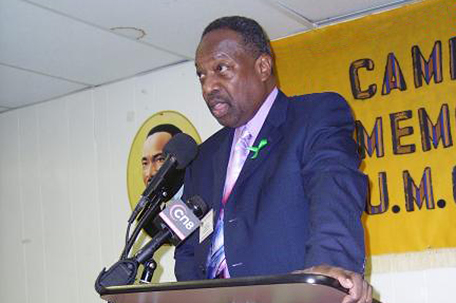 David Fattah, Sr. the patriarch of the House of UMOJA that Love built and father of former Congressman Chaka Fattah transitioned on Wednesday, December 5 after a brief illness. Fattah, a retired schoolteacher, was 75 years old.

During the height of Philadelphia’s raging gang wars, David used his stratagem of love to win, the heart and hand of companion he loved for fifty years named Falaka.

He extended this love to her six sons, thousands of inner-city boys, and the community.

In 1974, David authored a pledge (pact) called “The lmani Pledge” that documented a commitment to peace. This pledge was signed by gangs at a UMOJA sponsored conference and is still being signed by youth to this day.

Born July 6, 1943, he was reared by his AME minister, paternal grandfather and his grandmother, to whom he was given on Christmas Day by his young mother.

From them, David learned to respect others, love God and value education. Of him, a stranger might say, “that West Philadelphia guy spoke well and dressed well.” However, these comments would hardly cover his intellect.

“LEAVE NO CHILD BEHIND!” I heard Dr. Marian Wright Edelman proclaim on March 9, 1993, as she presented a devastating myriad of statistics about the despicable condition of Black children in America,” Fattah once said. ““Equity” became more than a word that day.”

These words attested to David’s motivation for a lifelong career of teaching and to creating better living, learning, and economic environments for African -American children.

David was co-founder of the House of UMOJA, Inc. and served as its director of community outreach for 50 years. In this capacity, he worked under contract with the Philadelphia School District’s Office of Climate and Safety, served as team leader for Umoja’s twenty-member safety support team.

Services for David Fattah are scheduled to be held at Vine Memorial Church, located at 56th & Girard Ave., next Friday, December 14, 2018, at a time to be determined later.