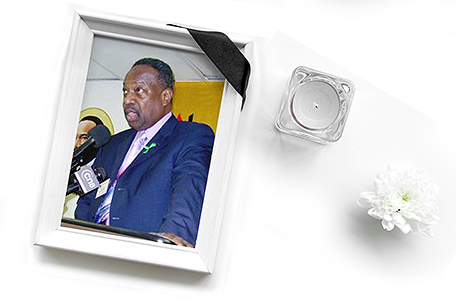 David Fattah passed away on Wednesday, December 5, 2018. He will be most associated with and remembered for his work at the House of Umoja and his efforts along with his wife Falaka Fattah, who together ended what was known as territorial gang war in Philadelphia. This became a ten-year effort. After this effort, over 3,000 boys came through the House of Umoja known as ‘Boys Town’. David’s latest effort of note has been to start the school year off leading a “father’s walk their children to school.” He also inspired Barack Obama to run for president indirectly. I will finish this last story later in the article.

The list of David Fattah’s accomplishments in the community is long. Dave was at it every day, and his steady and sure approach got things done. This is what first attracted Falaka, then known as Frankee Davenport to later David Fagan. Falaka, a widow and mother of six boys and a successful woman in her own right, had established herself as an editor at the Philadelphia Tribune and a promoter of acts such as Sam Cooke.

Falaka and Dave both attended the 3rd Black Power Conference, which was held at The Church of the Advocate, in 1968. They did not know each other then. Falaka came out of the conference with a commitment to create an international magazine that she named Umoja, which means ‘unity’. The idea of the magazine was to create positive images coming from the Black community.

Falaka held meetings on Sundays after church when a young 25-year-old David came by. He was an economics student at Temple and planned to move out to California. He told Miss Frankee that he was very busy, but he would try to help out. David started showing up at meetings, but his blunt approach turned off many of the attendees. Miss Frankee was taken aback by his approach herself. Then something clicked in her mind. Dave gets things done and Dave makes things happen. She stuck with him and he would stay late into the night working on the magazine.

After awhile, Frankee’s mother noticed that Dave was building relationships with each of Frankee’s boys. You see, David Fattah was a plodder. He moved deliberately towards a goal, once that goal entered his mind. In the meantime, the magazine was making quite a success. Finally, the night came when Dave decided to make his move. He left Frankee with what he said was an article he wanted her to read for the magazine. Dave left the house with the intent of returning later. You see, Dave had decided to forget about moving to California. He made a proposal to marry Frankee, who was twelve years older than him. He was willing to help her raise her boys. When Dave returned, she said she would think about it. Frankee called an astrologer friend of hers and asked him to look up their charts. The astrologer asked her to come over. He laughed and said ‘this is going to be one hell of an adventure’. The following day he called and said, ‘go for it’.

The adventure was only beginning. Shortly after they were married, letters started coming to the magazine asking why gangs were killing each other all of a sudden.  Frankee asked Dave, who was a gang member in the 1950s, to try to find out what was going on. He took to the streets and came back with important information, along with bad news. Gang members were killing each other because guns and drugs were coming in from Vietnam. South Vietnam had recently started its own heroin factory. In the thick of the Civil Rights Movement, the gangster world had been integrated. The bad news was Frankee’s second son was in a gang and targeted to be killed.

Frankee moved the gang into the house. The magazine was suspended and the family moved across town to West Philadelphia. Everyone crammed in one house: the gang, the six boys, and Frankee and David. The young people helped make the rules. The young boys were required to get jobs. They bought the rest of the houses on the block from the city for a dollar. Boys were sent to the House of Umoja from jail or came on their own accord after being traumatized by gang wars, like Councilman Curtis Jones, whose friend who was killed right in front of him. Enemies became friends. The House of Umoja was a safe place where no fighting took place.

The gangs themselves were organized and had developed their own culture. Dave set out to break the destructive aspects of the culture and use the positive aspects to his advantage. He tried to organize a truce between the gangs. Many of the gangs listened, but some said they had to even the body count from other gangs. Dave stayed with it, continuing to talk to the gang members and finally going deep into the jails to get permission from gang leadership to hold a gang conference. The only place that would hold the conference was the Quakers. Over 500 gang members showed up. This is where the pure genius of David Fattah came alive. Falaka characterized Dave as being able to inspire unreasonable people to be reasonable people.

Dave figured this way; the gang members wanted attention and recognition and they got that through their gangs. Dave changed things up on them and asked them to earn recognition by keeping their word, as in “your word is your bond.” The gang members were asked to make a pledge not to fight and over 500 members signed it. Dave started the conference by asking ‘Where did all of the killing start?’. They could name hundreds of incidents that deserved revenge, but not a starting point. And with no starting point, how could there be an ending point unless they decided to end it? This took keeping their word.

In 1972, over 500 gang members strong kept their word for 60 days until Mayor Rizzo was asked why did the gang members stop killing each other. When Rizzo replied, “I told those punks where to get off,” there went the recognition and there went the truce. The fighting started again the next day.

Other conferences followed; “No Gang War in ‘74” and “Stay Alive in ‘75”. By 1977, there were no incidents of gang killings. The House of Umoja has been recognized by three presidents.

In 1968, Dave met a woman and decided to change his last name to an African name. The family agreed to also change their names. Years later, when then Senator Barack Obama saw a United States representative with the name Fattah, he realized perhaps he could be elected with his name. This shows small decisions can make a big difference in history. David Fattah, a bright and shining light from Philadelphia has dimmed and now his light needs to be rekindled by a new generation. David Fattah will be sorely missed.