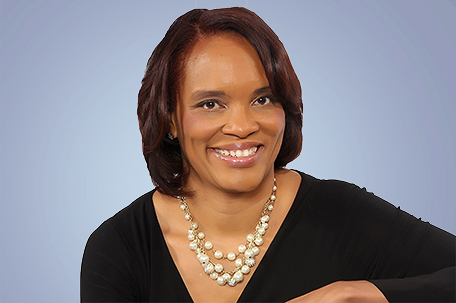 From a distance, Danette Reid may look like your everyday Black woman, but those who know her up close know that she’s all but ordinary.

The 50-year-old business owner, wife, and mother has managed to keep a low profile, all while aiding in the betterment of our surrounding communities in more ways than one. Her latest feat is the Reid Cares Foundation, Inc., an organization that aims to bring awareness to the issue of hunger amongst college students, so as to eradicate the problem.

For many a person, work ends once their shift is over, but not for this woman.

Already a full-time State Farm Insurance agent, greeting card designer, member of Salem Baptist Church of Roslyn, active member of Delta Sigma Theta Sorority, Inc. and more, Reid embarked on her newest venture in the spring of 2018 after coming across a news story that highlighted a common issue many of us are oblivious to – food insecurity on college campuses.

Both Reid and her husband are first-generation college graduates, and neither knew that food insecurity existed during their tenure at West Chester University. In fact, being a “broke college student” was and still is worn as a badge of honor. However, there is a stark a difference between being able to find a means if necessary and having no access to food at all, which is the reality for approximately 36% of college students, according to affordablecollegesonline.com.

While Reiddidn’t exactly face food insecurity head on, she does remember a time when her parents would periodically get laid off, temporarily resulting in the need for governmental assistance, something that she thinks may be linked to her charitable nature.

At the time of her discovery, both of Reid’s children were enrolled in their respective colleges on scholarship, something that she considers to be one of the “biggest blessings the family has received.”. And, because she believes the sentiment “heavy is the head that wears the crown”, she could not, in good faith, allow her newfound knowledge to be left in vain.

In the spring of 2018, the Reid Cares Foundation Inc., was born.

“I started with a food drive and just put it on my social media, asking people to donate canned goods that would then be donated to both [schools], West Chester University and Temple University.”

A year later, the Reid Cares Foundation has jumped from servicing only two schools, to servicing five; Arcadia University, Temple University, Manor College, West Chester University, and now Cabrini University as well. With the help of businesses, clubs, her sorority sisters, charities, and generous donors, approximately $5,000 worth of food, toiletries, and gift cards have been donated under the Reid Cares brand.

What makes Danette Reid different is that none of the work she does is for personal gain and/or recognition. She makes no airs and asks for no applause, which speaks to her character. Though she does do the majority of the food drop-offs, she opts not to do them during peak pantry hours as to not bring attention to herself.

“The goal for me, is to feed the kids first and foremost… It doesn’t have to come from Reid Cares… If you’re [an] organization [that] wants to have a food drive, you can even say it’s your idea… that’s wonderful.”

Genuine and empathetic are the first two words that come to mind when trying to articulate the essence of Reid. As one could imagine, the work that she does can be overwhelming, being that she occupies many different spaces. However, she is aware that the cause is greater than herself, which allows her to persevere.

In 20 years, her hope is that hunger is eradicated.

“We must acknowledge the problem in order to find and implement a solution,” Reid said. “Most people don’t realize that food insecurity among college students is a problem. Our job is to shine a light on the issue, help stock pantry shelves, raise funds for meal plan scholarships and eventually pass laws that extend federal aid for meals to food insecure college students. “

For more information on Reid Cares LLC., how and where to donate, how to volunteer, partnerships, and more, visit: https://reidcaresfoundation.org.

Republicans cite Lott in calling for Reid to quit