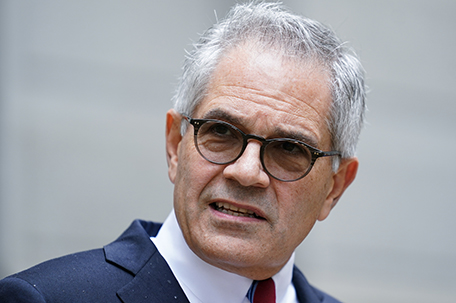 ABOVE PHOTO: Philadelphia District Attorney Larry Krasner speaks with members of the media during a news conference in Philadelphia, in this file photo from Oct. 13, 2022. Pennsylvania state House Republicans on Wednesday, Oct. 26, 2022, introduced a measure to impeach Krasner, claiming he was responsible for the rise of crime across the city. (AP Photo/Matt Rourke, File)

District Attorney Larry Krasner on Monday announced the arrests of multiple members of violent groups engaged in gun trafficking and retaliatory shootings in the Cobbs Creek area of Southwest Philadelphia. Individuals have been charged with murder for their roles in a deadly mass shooting on July 4, 2021, at a community barbecue on the 100 block of South 60th Street, as well as for the murder of a 15-year-old boy in March 2021.

Following months of investigation of the 2021 shooting incidents, which were connected by relationships with the rival groups, the District Attorney’s Office Gun Violence Task Force (GVTF) last week executed arrests of five gang-affiliated individuals on charges ranging from straw purchasing of firearms to murder. Three additional individuals are wanted as fugitives.

The GVTF, along with law enforcement partners at the Philadelphia Police Department (PPD), Office of the Attorney General (OAG), and other state and federal partners, have worked tirelessly and collaboratively to investigate shootings involving rival groups or gangs; incapacitate their leadership and members, and hold them accountable for their crimes in a court of law.

On Monday, representatives from the PPD, OAG, FBI, ATF Philadelphia, and other law enforcement partners joined DA Krasner, the GVTF, and members of the DAO Victim/Witness Services Unit at the Church of Christian Compassion in Cobbs Creek to announce the arrests of five “02da4” and “FSB” affiliated individuals.

“Not long ago, I promised the public that members of ‘02da4’ would ‘go to the jail.’ And now they have,” Krasner said. “They are facing the bars of a jail cell, followed vigorous and just prosecution by the Philadelphia District Attorney’s Office for murder by gun, for shootings, and for other heinous crimes. Let me be clear to all gang and group members who are involved in gun violence: You’re next. Put down the guns. Put them down now or get ready for a lot of unhappy holidays behind bars.”

“We want to give special thanks to PPD Detectives David Gannone and James Brady, who worked tirelessly with GVTF ADAs led by Supervisor Bill Fritze on this deep dive investigation,” said ADA Jeffrey Palmer, assistant supervisor of the GVTF. “We want to thank our partners in law enforcement at the PPD, Office of the Attorney General, FBI, and federal agencies for their continued, collaborative work to help identify drivers of group gun violence in communities like Cobbs Creek. Our thoughts are with the victims and survivors of this senseless violence. We want communities here and throughout the city to live with hope instead of fear.”

“The FBI is fully committed to our role in battling Philadelphia’s gun violence epidemic and to our partnership with each of these agencies,” said FBI Special Agent in Charge Jacqueline Maguire. “We will continue to provide all available resources, information, and personnel, to lock up violent offenders and take guns away from people who shouldn’t have them.”

“We will continue working closely alongside our local, county, state, and federal partners,” said Eric DeGree, special agent in charge of ATF’s Philadelphia Field Division. “These longstanding partnerships have been and will continue to be the essence of ATF’s mission in combatting violent crime and keeping our communities safe from gun violence. These arrests are the culmination of the robust investigative relationships ATF maintains with our dedicated partners.”

“Gun violence has a devastating impact on the lives of our friends, our family and on the communities in which we live. Combining commonsense gun safety reforms with a commitment to restoring peace and safety in our neighborhoods should be the top priority of all residents of Philadelphia,” said State Rep. Morgan Cephas (D-192nd Dist.), chair of the Philadelphia House delegation. “I wholeheartedly support bold actions such as this, led by the Gun Violence Task Force. This is a significant step forward utilizing a strategic, coordinated enforcement effort that will help to fight back against this senseless gun violence epidemic. There is still a lot of work to do, but this coordinated operation helps to bring hope to our city.”

“It is an understatement to say gun violence has reached unprecedented levels in Philadelphia, especially among our youth, and continues to be top of mind for practically every resident,” said Councilmember Sharon Vaughn (At-Large). “The efforts and time devoted by DA Krasner and other law enforcement partners to this issue — evident per today’s announcement — clearly underscores the urgency required to find a resolution that will save countless lives. I applaud all those whose diligence led to this significant moment for the Gun Violence Task Force.”