Sharing her unlikely journey, Deesha Dyer reminds Class of 2016 to pay it forward 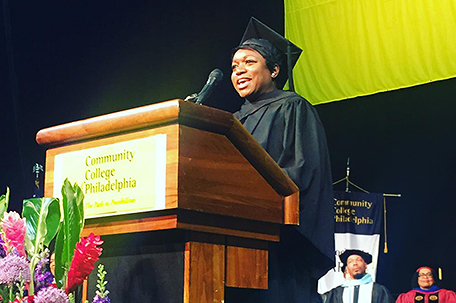 Deesha Dyer’s extraordinary journey took her from Community College of Philadelphia to the career of her dreams in the White House.

Last week, Dyer made a triumphant return to Philadelphia, where she delivered the College’s commencement address as special assistant to the president and social secretary of the White House.

All of this, from a young woman who at one time thought she could get by without a degree and dropped out of college.

Her story of resilience and dogged perseverance resonated deeply with the College’s candidates for graduation, many of whom overcame many obstacles to earn their degrees. After the ceremony, one graduate tweeted, “Deesha Dyer, you were truly the best commencement speaker I’ve ever heard. So glad CCP invited you.”

Dyer told students she tried many occupations during her time away from school – working as a secretary, a hip hop journalist and serving as a volunteer.

But while mentoring young girls in Philadelphia, Dyer couldn’t help feeling “like a hypocrite, stressing to them that they needed to go to college, no matter what,” she said, when she had no degree herself.

She decided to re-enroll in college. It wasn’t easy because she had to prepare to take college-level courses and was placed in pre-college math.

“Some days you wanted to give up. Some days turned in to a series of days, and graduating college seemed like an impossible task. Well, you defeated those days. You rose above them and you are here. I am here, we are here!” she told more than 1, 000 candidates for graduation in attendance, which included candidates who had earned Associate in Arts, Associate in Applied Science and Associate in Science degrees, as well as those who completed certificate programs.

In 2008, Dyer found herself swept up in the hope and change movement personified by a dashing U.S. Senator named Barack Obama, who was running for president. She applied for a White internship, skeptical that a 29-year-old community college student would have a shot. To her surprise, she got it.

Back home in Philly after her internship, she received the email that changed her life. Would she be interested in coming to work at the White House? “Of course I was!” Dyer said.

She recalled being fearful that senior officials wouldn’t hire her when they learned she didn’t have a degree. To her surprise, she was offered the job with the caveat that she would finish school. Dyer spent five years completing her degree in Women’s Studies. For two of those years, she took online classes while working for the White House.

Although she wears many titles proudly, Dyer is exceedingly proud of her distinction as a Community College of Philadelphia alumna. Happy to be home and falling into the local jargon, the West Philadelphia native described herself as “just another ‘jawn’ from Philly”(“jawn,” i.e. person, place or thing) who cruised past societal limits and kept going.

She urged graduates to “stand proud in who you are as a Community College of Philadelphia graduate. Know that you will meet people who will make you feel as if you have not earned your degree — as if your degree is worth less than others; but you have earned it. It is something that no one can take away from you.”