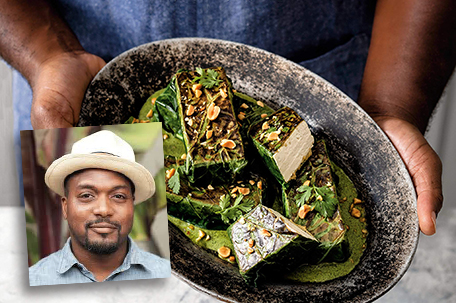 The Free Library of Philadelphia’s Culinary Literacy Center and Philadelphia Parks and Recreation’s new initiative to develop the City’s first urban agriculture plan, “Growing from the Root,” presents an evening with chef and author Bryant Terry as he shares his latest book, “Vegetable Kingdom: The Abundant World of Vegan Recipes”(Penguin Random House).

The event will take place on Tuesday, February 25 from 6:00p.m. until 8p.m. at the Central Branch of the Free Library of Philadelphia Culinary Literacy Center, located at 1901 Vine Street.

Terry is a James Beard Award-winning chef and educator and the author of Afro-Vegan. He is renowned for his activism and efforts to create a healthy, equitable, and sustainable food system.

He is currently in his fifth year as chef-in-residence at the Museum of the African Diaspora in San Francisco, where he creates programming that celebrates the intersection of food, farming, health, activism, art, culture, and the African Diaspora. His work has been featured in the New York Times,the Washington Post, the San Francisco Chronicle, and on NPR’s “All Things Considered.”

At the event, Terry will showcase his approach of bringing together fresh ingredients alongside vibrant playlists to inspire attendees to make these joyous dishes at home again and again. He will also talk more about how this book relates to his broader approach to food systems, and the ways in which Philadelphians can continue to inspire one another to cook beautifully and accessibly.

“Bryant Terry’s “Vegetable Kingdom” is phenomenal,” Angela Y. Davis, distinguished professor emerita at the University of California Santa Cruz, said. “Like his previous cookbooks, it transforms the kitchen into a site for creating global culinary encounters, this time inviting us to savor Afro-Asian vegan creations. With the recommended music, each recipe reminds us that vegetables can not only help us save the planet, but can also be a source of boundless enjoyment.”

“”Vegetable Kingdom” is an altar to our Diasporic ancestors, a legacy offering to our children, and a shrine to the plant friends who nourish us,” Leah Penniman, co-director of Soul Fire Farm and author of “Farming While Black,” said.”As a parent, I felt inspired by the ingenious ways that Bryant ‘Blackifies’ uncommon vegetables and makes them kid-friendly. As a Haitian, I felt particularly jubilant as I prepared spicy Pikliz to the steamy Creole love ballad “Ou Fe’m” that Bryant paired with the recipe. As an overworked, time-scarce person, I appreciated the tips for advanced prep on the weekends and inclusion of efficient meals.”

The free event will include a food tasting, and copies of the book will be available for purchase.

About the Free Library of Philadelphia’s Culinary Literacy Center. To pre-register for the event, visit: https://www.eventbrite.com/e/bryant-terry-vegetable-kingdom-book-talk-and-tasting-tickets-91719685047.

About the Culinary Literacy Center

The Free Library is advancing literacy in Philadelphia in a unique and innovative way — with a fork and a spoon. Cooking and eating are educational acts and provide opportunities to learn math, science, languages, history and so much more. Using cooking as the vehicle for learning, the Culinary Literacy Center advances literacy through food and cooking around a communal table.