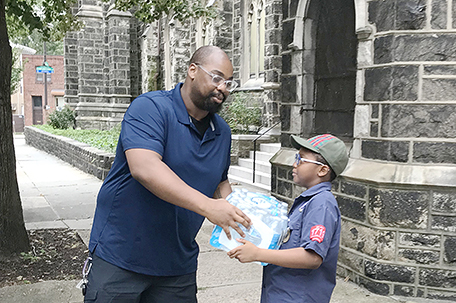 ABOVE PHOTO:  Gary L. and his son, Ethan L., who is part of the Arrow of Light Den, carrying cases of water into the church.

There are 12 points in the Cub Scout law and one of them is to be helpful to others without expecting an award. This year, Cub Scout Pack 1719, located in the Germantown, wanted to take being helpful to another level by assisting the residents of Flint, Michigan.

The residents of Flint still do not have clean water and donations have declined over the years. Cub Scout Pack 1719 wanted to change this and did so in three ways: 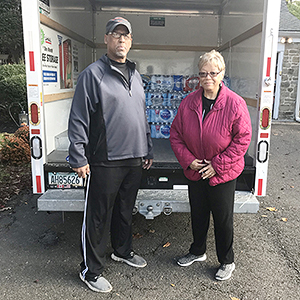 The driver, Brian Jenkins, and the pack treasurer, Kate Jenkins.

The Cub Scout Pack 1719 is For Flint Water Drive was kicked off in September. Members of the pack sent emails, posted on social media and spread the word asking people to donate cases of water.

The pack’s chartered organization, First United Methodist Church of Germantown, sponsored a GoFundMe page to help raise funds. The drive ended the first week of November. At that time 110 cases of water were donated and over $6,000.00 was raised.

On Wednesday, November 7, the older Cubs along with their parents loaded the truck with donations while the younger Cubs made cards to let the families that receive help from Catholic Charities know that Cub Scout Pack 1719 supports them.

The donations were delivered to Catholic Charities on Friday, November 9 by the pack treasurer, Kate Jenkins and her son, Brian Jenkins. 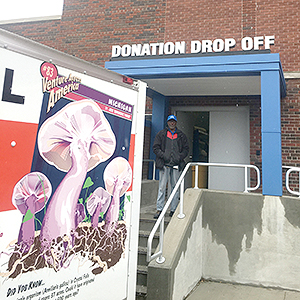 The volunteers gave them a tour of the facilities and they were both impressed and saddened by what they saw. Catholic Charities is housed in a renovated school and they help several hundred people by serving meals, giving them clothes, water filters and care packages.

The care packages include items such as diapers, formula and dish soap to name a few.

However, though donations come in, there is not enough to sustain these families longer than 30 days; for example, a family of four who receives 1 roll of toilet paper has to last 1 month. 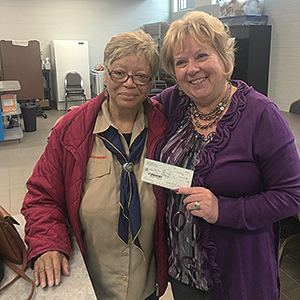 Scouting is more than camping, hiking, and tying knots, it’s about being friendly, kind and helpful.

Cub Scout Pack 1719 is proud that they were able to apply the other laws of Scouting to help the residents of Flint.

If you would like to help, please donate to the GoFundMe page: GoFundMe.com/2kfg6ps-for-flint.

All funds raised will be given to Catholic Charities.

For more information about Cub Scout Pack 1719, visit: CubScoutPackl719.com or email the Cubmaster at [email protected].