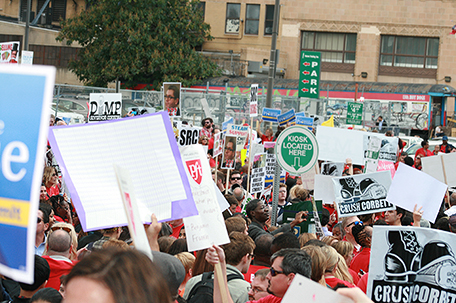 The Philadelphia Federation of Teachers fired its first shots at the School Reform Commission in the Court of Common Pleas. They hit their target, if only temporarily.

On Monday, Common Pleas Court Judge Nina Wright Padilla issued an injunction against the SRC that stops the body from making changes to the teacher’s health care benefits.

The changes, changes that included a requirement that teachers pay anywhere from $20 to $200 a month in health care premiums, had been imposed when the SRC voted on Oct. 6 to cancel the teacher’s contract.

“The preliminary injunction granted today by Common Pleas Court Judge Nina Wright Padilla reinforces our view that, the School Reform Commission cannot simply decide to stop negotiating, then unilaterally cancel the PFT contract and impose new terms,” Jordan said. “The decision is a testament to the notion that these kinds of contract changes should be decided at the bargaining table.”

Monday’s action is part of a series of legal challenges filed in response to the SRC’s decision to go to Commonwealth Court to get retroactive permission to cancel the PFT contract. In addition to asking that the entire case be moved to Common Pleas Court, the PFT has filed a complaint with the Pennsylvania Labor Relations Board accusing the SRC of bargaining in bad faith.

“We feel that the SRC’s attack was not only cowardly and disrespectful, but lacking legal merit,” Jordan said.

Monday’s decision was just the latest part of the shock wave that the SRC’s decision to cancel the PFT contract set off. From a rally that attracted thousands of people and led to the closing off of a section of North Broad Street to a contentious SRC meeting that featured 60 registered speakers and was peppered with outbursts from the audience, people have made sure that the SRC knows how they feel.

For example, during a presentation for Parent Appreciation Month, audience members shouted, “You don’t appreciate parents!” A presentation for the Home Depot Seniors of the Month was met with “Better make sure that the check doesn’t bounce!”

Then there were the chants of “What do we want?! Fair funding! When do we want it?! Now!!!” that seemed to break out, and the accusations on the part of teachers that the SRC’s decision was part of a plan launched by Gov. Tom Corbett and SRC Chair Green to save both of their jobs.

And that was just the unofficial comments. Those who signed up to speak to the SRC weren’t much nicer.

Even the students got involved.

“Our teachers deserve the right to a fair contract,” said Alfredo Practico of Masterman Middle School. “Our teachers, through the toughest of times, stood tall for our benefit. It’s been taught to us that it’s not whether you win or lose, it’s how you play the game. What are you showing us now?”

After the meeting, Hite and Green were asked if a contract settlement was still possible considering the bad blood between the SRC and the PFT.

“At the end of the day, regardless of what happens in the courts, a negotiated settlement is better,” he said. “The teachers would rather have that.”