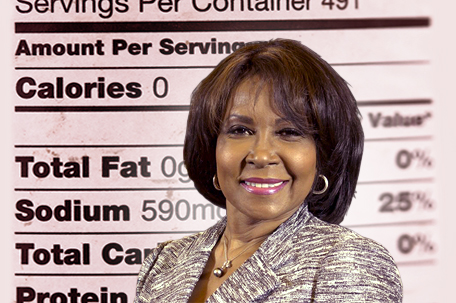 On Thursday, Councilwoman Blondell Reynolds Brown (D- At-Large) introduced legislation that would require restaurant chains to place labels on permanent menu items or combination meals with 2,300 mg or more of sodium.  This requirement would apply to printed and electronic menus, menu boards, and food tags.  This legislation is a continuation of Councilwoman’s menu labeling law that took effect in 2010.

Under the new legislation, these establishments would need to display an adjacent sodium warning and the following explanation in plain view:

Philadelphia has extraordinarily high rates of hypertension and the highest rate of premature death from heart disease of the ten largest U.S. cities, according to the Behavioral Risk Factor Surveillance System and the National Center for Health Statistics Interactive Atlas of Heart Disease and Stroke.  African-American Philadelphians have even higher rates of hypertension (48%) and premature death from heart disease (78.5 per 100,000) than Philadelphians in general, according to the 2014-2015 Public Health Management Corporation Household Health Survey and the Department of Public Health’s 2014 Vital Statistics Report.

“It is imperative that we work with the City of Philadelphia to secure additional protection measures designed to further protect and improve the health of children, families and our communities,” Councilwoman Reynolds Brown said.  “We cannot assume that consumers know the nutritional content of food before they eat.  This legislative measure is another opportunity to promote smart and healthy food choices.  In addition, it is an opportunity to educate our communities about what they are consuming.”

“We conducted several experiments to look at the effects of different types of sodium warning labels on restaurant menus,” said Christina A. Roberto, PhD, Assistant Professor of Medical Ethics and Health Policy at the University of Pennsylvania.  “Our main finding is that having a sodium warning label on a menu helps consumers make more informed decisions, and a ‘stop sign’ logo with the text “sodium warning” is likely to be more effective than the NYC salt shaker icon.”

“High sodium diets contribute to the deaths of thousands of Philadelphians each year,” Philadelphia’s health commissioner Dr. Thomas Farley said. “Putting a warning label on restaurant menu items with more than a full day’s worth of sodium makes it easier for Philadelphians who are trying to make healthy choices to do so. This simple tool can help save lives and prevent needless disability due to heart attack and stroke.”

“Heart disease and stroke are robbing too many Philadelphians of their lives and their ability to work and support their families,” said Mayor Kenney. “People can’t make good choices without information. A sodium warning label gives people information they need to help keep themselves healthy.”

Philadelphia would join its sister city New York in taking the lead by helping Philadelphians look for sodium warning icons when dining out. (#LookBeforeYouEat)

Councilwoman Reynolds Brown also introduced resolutions honoring and recognizing the career of Monica Malpass on the occasion of her 30-year anniversary as a journalist for Philadelphia’s ABC News; honoring the African American Children’s Book Project on the occasion of the 26th Annual African American Children’s Book Fair and that February 3rd is the kick off of the National Literacy Initiative’s “Preserve a Legacy, Buy a Book” program; honoring and recognizing Meryl Levitz for her extraordinary service to the citizens of Philadelphia and her stewardship of Visit Philadelphia, and recognizing National Mentoring Month and the work of Big Brothers Big Sisters Independence Region to connect Philadelphia’s  children to positive and dedicated adult mentors.