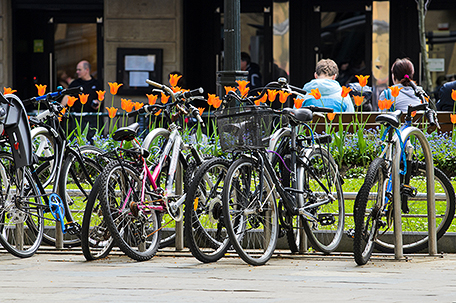 Councilwoman Blondell Reynolds Brown, Chair of the City Council Committee on the Environment, introduced a bill to authorize Bicycle Transit Systems to plan and operate a bicycle sharing program in the City of Philadelphia and B-cycle to provide bicycles, stations and technology platforms for the system. Bicycle Transit Systems is a Philadelphia based business that has experience operating bike sharing programs in Washington, D.C., Boston and Chicago.

This bill is the result of over six years of collaborative research and planning.  In January 2008, Councilwoman Reynolds Brown called for a joint hearing of City Council’s Committees on the Environment and Transportation to investigate the creation of a Public Use Bicycle Program.

“Bike sharing will bring Philadelphia to the next level of bike friendliness, sustainability, and put us on par with tourism and hospitality destination cities across the world,” said Councilwoman Reynolds Brown. “When citizens choose bikes over cars, it is a win on multiple levels; promoting exercise, fitness and tourism, while reducing our carbon footprint.  Tourists and citizens alike will find it easier to attend our many cultural assets which are spread across the City.”

Furthermore it is important to note that the program will be funded through the City’s Capital Budget, ensuring that we are not placed in an either/or discussion, pitting bike sharing against our school funding crisis or other requests from the General Fund.”

In 2013, WalkScore.com ranked Philadelphia as the Fourth “Most-Bikeable” City in the nation.  Philadelphia would join 40 other cities across the United States with bike sharing programs including New York, Washington, D.C., Boston, Chicago, San Diego and Portland, where bicycle transit is embraced as an alternative form of transportation.