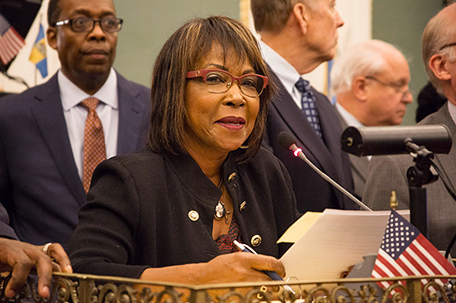 Councilwoman Blondell Reynolds Brown (At-Large) introduced legislation to authorize the Committee on Law and Government to hold public hearings to examine the benefits of providing childcare in courtrooms for jurors and others involved in court business, and to evaluate the feasibility of instituting such a childcare system in Philadelphia.

Jury service has long been an important aspect of American civil life. Public participation in the jury system is a key avenue by which citizens are able to engage with the political process. Furthermore, a hallmark of American constitutional democracy is the right to an impartial jury. The courts have largely interpreted this to mean that defendants are entitled to a jury of their peers, or to a jury that generally represents a cross-section of the community. Due to this, jury diversity is a necessary component to fully fair trials. However, Philadelphia juries do not look like Philadelphia and suffer from sparse and homogenous jury participation notably lacking women and caregivers.

In its 2016 report, the Pennsylvania Interbranch Commission for Gender, Racial and Ethnic Fairness found systemic reasons for juries’ lack of inclusiveness.  It detailed how diverse and disadvantaged young women are often unable to serve on juries due to childcare or eldercare responsibilities.  Instead of excusing this section of the population from jury duty, which may reduce representativeness, the Commission recommended that each judicial district in the Commonwealth provide childcare for jurors.

Additionally, Mayor Kenney’s Juror Participation Initiative Committee, a committee formed to craft strategies to increase the number and diversity of Philadelphians who respond to jury summonses, is focused in part on alleviating the hardship and inconvenience of jury service.  It recommended that, to enable jurors who are primary caretakers of children to serve on juries, Philadelphia should provide for a court-sponsored childcare program.

“Childcare does not hinder women in the workplace alone, but also prevents women and caregivers from engaging and participating civically as well,” Reynolds Brown said. “Due to skyrocketing costs of daycare as well as barriers to enter the workplace, many women pay the ‘children penalty’ and care for their children during the hours jury duty is held, making them unable to fully participate as a citizen and a member of society. This circumstance can be alleviated.”

Reynolds Brown added, “We cannot expect caregivers and potential jurists to scramble to find safe, reliable, and affordable childcare for an unknown amount of time to serve as a jurist while also potentially incurring a monetary loss for the time the trial takes. By providing courtroom childcare, we would not only provide caregivers the assurance that their child is safe during the completion of their civic duty, but also the convenience of free on-site childcare. In doing so, we would also provide the courts with a diverse jury that includes women and caregivers. Therefore, we will be ensuring more fully fair trials than what currently exists.”

Two court childcare programs already exist in Pennsylvania.  The Montgomery County Court Care Program was started in 1996 and serves approximately 10 children per day while their parents or guardians conduct court business.  There is no charge for the service and it is available to all families who are engaged in court. Allegheny County first opened a “Children’s Waiting Room” in 1980.  The program has expanded in the intervening years, with three Children’s Rooms existing in the Family Division Facility and in the Criminal and Municipal Courthouses respectively. Since 2001, the program has provided almost 60,000 children with a haven removed from the stress and difficulties of the courtroom.