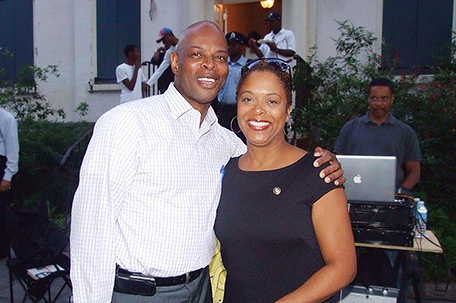 ABOVE PHOTO:  Councilwoman Cindy Bass with State Represenative Stephen Kinsey at the Oldies in the Park event.

Councilwoman Bass (D-8th Dist.) is continuing her free Summer 2017 Events series featuring Showtime at the Apollo on Monday, Jazz in the Park on Tuesday, Oldies in the Park on Wednesday and Friday family movie nights. The series kicked off during the second week of July and the movie nights began in June.

“As Chair of the Committee on Parks and Recreation, I want to be involved in creating programming that fits community needs and puts vital neighborhood parks and rec centers to good use,” Councilwoman Bass said.

Showtime at the Apollo at Stenton Park, 1701 W. Courtland Street, runs Mondays from 6 p.m. until 8 p.m. and features MC Derek Lee. The talent show-themed event includes giveaways, prizes and special guests. Residents are encouraged to bring their own chairs. The event will continue every Monday until August 28.

Jazz in the Park at Morris Estate Recreation Center, 1610 Chelten Avenue, in collaboration with state Rep. Stephen Kinsey (D-201st Dist.), ends Tuesday, August 15. Residents enjoy food trucks and live musical performances from 6 PM until 9. During the final Jazz in the Park installment, Councilwoman Bass honored The Most Worshipful Prince Hall Grand Lodge of Pennsylvania with a Council resolution for their outstanding service to the community.

“There’s something in the Summer 2017 Events Series for neighbors of all ages,” the Councilwoman said. “Whether it’s a chance for our young adults to showcase their talent at Showtime at the Apollo, Jazz and Oldies in the Park that might attract our more seasoned crowd, or our movie nights showing films rated ‘G’ and ‘PG’ for our younger kids and their families.”

Summer Movie Nights are cosponsored by Bringing Everybody Together and Philadelphia Parks and Recreation. Logan School, 1700 Lindley Avenue, will host movie screenings through September 1.