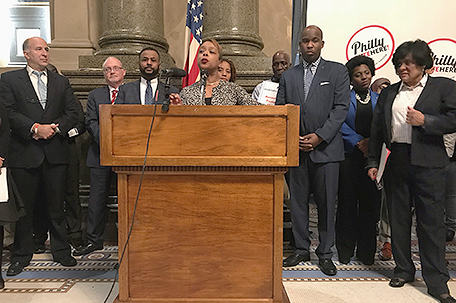 I want to take it one step further and say that there’s no former president, living or dead, who would think or now thinks that Donald Trump is the most presidential person to occupy the Office of the President. I join with the millions of people across this country who not only did not vote for him, but now call for his resignation or his removal from office based on his mental fitness to hold the position of President of the United States of America.

Donald Trump has shown us time and time again who he is. He is racist. He is sexist. He is xenophobic. He was probed for race discrimination because he refused to rent apartments to Black people. And now he wields that same discriminatory power over the entire nation. So, in our role as elected officials, we absolutely must fight back.

I applaud Councilwoman Jannie Blackwell for calling elected officials together from the city, state and national levels to decry the president’s reprehensible comments. Councilwoman Blackwell continues to support and advocate for African and Caribbean communities.

Like when I passed resolutions condemning Trump for his attempt to roll back contraceptive access for women, condemning him for his discriminatory immigration ban targeting Muslim-majority nations, and rebuking him for his general conduct which continues to be a direct affront to American decency and democracy, Philadelphia City Council must and will continue to fight for what’s right.