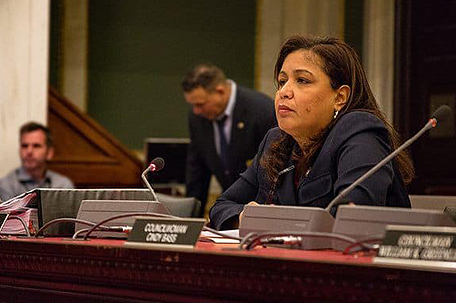 “The years of life, hope, and possibility that have been lost are heartbreaking, said Sanchez, who is speaking out against the weekend gun violence that has become commonplace in the Kensington and Hunting Park neighborhoods. According to Sanchez gun violence flourishes in some neighborhoods, while being reduced in others due to the allocation of resources by public officials.

“The ongoing opioid crisis has concentrated an escalating drug trade in eastern North Philadelphia, and this largely unchecked drug market has drastically increased the danger for community members, families, and children, as violent disputes intensify. We need a comprehensive public safety strategy with police, our District Attorney’s office and the Mayor,” said Sanchez, who has been vocal about the need for a new strategy to address the distribution of street drugs in city communities.

Public safety is one aspect of the required responses to the problem, according to Sanchez, who believes major resources will help address the systemic problems that make communities incubators for drug distribution and gun violence.

“From the tragic loss of life and injury, to the compounding community trauma, what we are experiencing is the result of decades of intergenerational poverty, a lack of access to opportunity, neglect of the public right of way, flourishing vacancy and blight, and a lack of investment.

We need to help residents reclaim their community, clean streets, and safe corridors for our children, an investment in training for today’s jobs, and stable, affordable housing. We are condemning our children to trauma and normalizing chaos,” said Sanchez.

Making “restorative investments”, in her estimation, will bring a renewed sense of hope, promise, opportunity, and a peaceful future to the Hunting Park and Kensington neighborhoods.