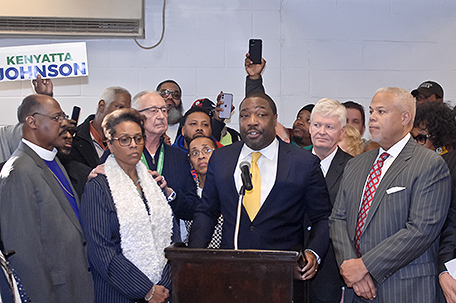 ABOVE PHOTO: Kenyatta Johnson (center) speaks with supporters as his lawyer Patrick Egan (behind him to the right), his wife Dawn Chavous’ lawyer, Barry Gross and State Sen. Anthony Willians look on.

Councilmember Kenyatta Johnson and his wife, political consultant Dawn Chavous, joined former Universal Companies executives Rahim Islam, and Shahied Dawan and Michael Bonds, former President of the Milwaukee School Board in being indicted by the Department of Justice Wednesday.

But on Wednesday, Johnson became the second member of Philadelphia City Council to be on the wrong end of a federal indictment.

Councilmember Johnson and his wife, political consultant Dawn Chavous, forner Universal Companies executives Rahim Islam and Shahied Dawan, were indicted on a total of 22 counts including tax fraud, honest services fraud, embezzlement and racketeering related to the development of the former Royal Theater site in South Philadelphia and other properties that Universal owned.

In addition to Johnson, Sixth District Councilman Bobby Henon is under indictment. He and Business Manager John Dougherty are among the members of the International Brotherhood of Electric Workers Local 98 that have been charged in a 116-count indictment that includes charges of honest services fraud and embezzlement that is scheduled to go to court sometime in 2020.

The bulk of the more serious charges were directed at Islam and Dewan. Islam is a former contributor to the Philadelphia Sunday Sun.

The indictment alleges that Johnson used the controversial legislative maneuver, “Councilmanic prerogative” to get bills passed that gave Universal Companies the favorable zoning they needed to sell properties in South Philadelphia. In exchange, Chavous was given consulting contracts totaling more than $66,000 that were, in reality, bribes for Johnson, the indictment says.

To pay those alleged bribes, as well as gym memberships, political contributions and other things that were written off as business expenses, but not claimed on tax returns, Islam and Dawan embezzled $463,000 from Universal Companies, the indictment continues.

Because of this, Universal became the center of an enterprise corruption scheme.

“Two businessmen wanted a corrupt advantage,” First Assistant U.S. Attorney Jennifer Arbittier Williams said in a news conference announcing the indictments. “They wanted to pay to play and the indictment charges that they found willing partners in Kenyatta Johnson and his wife, Dawn Chavous.”

The bulk of the indictment centers around the former Royal Theater property at 1524 South Street.

Universal Companies originally purchased the site from the Preservation Alliance for Greater Philadelphia for more than $286,000 back in 2000. Plans to develop the site never came to fruition for a variety of reasons ranging from proposals that didn’t pan out to problems with the Department of Licenses and Inspections, according to the indictment.

The property was put up for sale in 2012, but because it wasn’t zoned in a way that would be economically feasible for potential buyers, it didn’t move. Johnson’s bill to change the zoning allowed Universal to sell the property before the city could take it over under a blight control program. Universal eventually sold it for $3.7 million.

“I’ve held elective office for 20 years, working as an advocate for the people,” Johnson said. “It makes no sense for me to work as hard as I’ve worked and lose it all making some kind of backroom deal.”

But while he denounced the charges against him as an “overzealous prosecution” whose mission was to “bully and intimidate,” Johnson was particularly angry at the accusations against Chavous.

“I don’t need to find jobs for my wife,” he said. “Everyone who knows me knows I married up.”

“I find those charges to be wrong, offensive and downright sexist,” said Gross, Chavous’ lawyer. “The reason she isn’t [at the press conference] now is because she’s working.”

But while the Johnson and Chavous indictments got the most attention, the most eye-popping charges were leveled against Islam and Dewan.

The two men are being charged under the RICO (Racketeer Influenced and Corrupt Organizations) act, which was a result of the charges taking a national tone. In May, Michael Bonds, the former President of the Board of Education in Milwaukee, Wisconsin pled guilty to two counts of bribery for taking money from Universal in exchange for voting to give the organization charter school contracts. He is scheduled to be sentenced in March and is looking at 10 years in prison and $500,000 in fines, according to the Milwaukee Journal Sentinel.

In a statement issued late Wednesday night, Universal Companies called the indictments against Islam and Dewan the “most profound” of the challenges the organization has faced in it’s history.

But the organization, which was founded by Kenny and Faatimah Gamble, pledges to continue it’s mission of providing affordable housing and primary and secondary charter school management in South Philadelphia.

“While we respect the right of our former Executive Officers to defend themselves, we cannot ignore the seriousness of the indictments brought against them or the open wounds that have been left on our organization,” the statement said. “As in the past, we will not allow these impediments to be fatal or to deter us from continuing our mission of “Improving Communities… Changing Lives”.  We are dedicating ourselves to restore not just our reputations, but our life-long-commitment to the same goals as the founders.”

Should Islam and Dewan be convicted of all of the crimes they’ve been accused of, they face 330 years, and 285 years in prison, respectively. Johnson and Chavous both face 40 years in jail should they be convicted. Under federal sentencing guidelines, you must serve 85% of your sentence before you can be considered for parole.

There has been no trial date set.