Councilmember Jamie Gauthier: an “A” for caring for her district 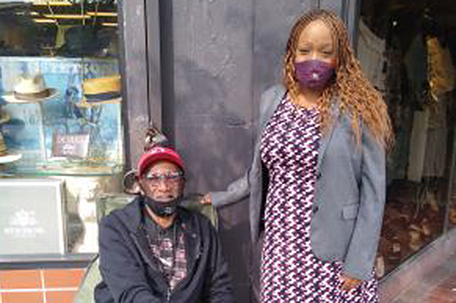 Many residents of the 3rd Councilmatic District in West Philadelphia have been receptive to the change in leadership provided by Councilmember Jamie Gauthier.

Gauthier is responsible for one of the richest districts in the City of Philadelphia, and also one of its poorest. Nothing has stopped the freshman councilmember’s commitment to  her district, from  the start of the COVID-19 crisis through the protests and civil unrest following the death of George Floyd.

I spoke with Gauthier about the businesses that were affected, connecting with her constituents and addressing the issue of youth crime.

“The City and the commerce department has set up rent and loan programs for the small businesses here,” Gauthier said. “Small businesses can also avail themselves [to] the Façade Programs and renovation programs that the City has.”

“So, the City has definitely come to the table to bring resources to small businesses, but the need is great, though, and we need even more assistance from the state and federal government in order to really help these businesses get back on their feet.”

I asked Gauthier what was being done to engage young people in her district, and about safer activities to reduce crime?

“Our City’s Office of Violent Crime Prevention has several programs that they are really trying to [implement], implore and engage these young people,” she said. “So, for one, our incredible messenger program. They have folks that have kind of been through the criminal justice system come and talk to the young people who are at risk. They try to defuse tensions in the neighborhood, and they try to set young people on a different path.”

“The City also has workforce programs for young people,” Gauthier added. “I think that’s a critical piece of this, and another thing the city does [and] is the most important, is to support community led programs that are trying to engage and reach young people. But I think we need to do much more.” I asked Gauthier whether the upheaval caused by the events of this year have elevated her leadership role in the district.

I asked Gauthier whether it was safe to assume that after replacing Councilmember Blackwell, she had to hit the ground running.

“Yeah, there’s no other way to do this other than to hit the ground running,”  Gauthier said. “People’s needs don’t take into account your newness into a position, so it was imperative that I formed a strong team and that we’ve been able to address the desires of our constituents from day one.”

From virtual town hall meetings, in-person community meetings to chairing several committees such as Homeless, Housing and Neighborhood Development, Gauthier has been busy. People in her district seem to embrace the breath of fresh air her leadership has brought to West Philadelphia.

“There are no quick comments when it comes to politics,” Michael Burch, publisher and editor of The Parkside Journal, said. “I find that she brings a quality of professionalism to the office and a willingness to make changes and is open to meeting and talking to the people. The residents of Philadelphia are very fortunate to have her in that office.”

Former school teacher Yusef Muhammad — formerly known as Mr. Jackson when he taught at Shaw and Beeber Middle School, where Gauthier attended in her youth — had a great conversation with her during her district visit.

“This is my first initial meeting and conversing with her,” Muhammad said. “I think it’s a great thing. Man, you know, as I was explaining to the Councilwoman, one administration goes and a new one comes in. And it’s always welcoming to see the new one, because some of us get fixated to the point to where we don’t open our minds up to the new generation, new concepts and new ideas.”

“In my opinion as a Black man in the Black community, you have to be open-minded and listen to them, because they have so much to bring to the table,” he continued. “I commend her for the job she’s doing in this pandemic.”

We have the dysfunctional families. We have a lot of things right here in my opinion in this day and time, they are classified as epidemics, too, along with the coronavirus.”

“So, anyone that has any enlightenment and spiritualness, any concept of guidance to uplift and enhance the community, I’m all for it,” he concluded. “To this point, I would grade the councilwoman with an “A”.”

Before leaving 52nd Street near Chestnut Street during her district visit, Councilwoman Gauthier stopped into Babes — a woman’s clothing store — to speak with the store’s owner, Ted.