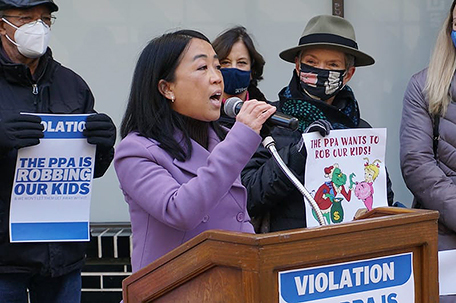 Councilmember Helen Gym (At Large) has announced plans for a City Council investigation into the demand by the Philadelphia Parking Authority for a near $11 million “repayment” from the School District of Philadelphia.

Gym said that emails between the Parking Authority and the District revealed a $34 million “trust” into which the PPA transfers dollars, raising concerns that they have been secretly depleting their on-street revenue funding designated specifically for the public schools without any notice to the District or the public.

The PPA has repeatedly failed to meet funding promises to the School District of Philadelphia, and last year delivered $0 in funding to the District.

When it was initially taken over by the state, legislators claimed it would deliver $45 million a year to Philadelphia’s schools.

“The Parking Authority should operate as a public trust — but they surrendered what little integrity they had the moment they asked schoolchildren to cough up $11 million for no documented reason,” Gym said. “This is the latest in a string of outrageous acts of financial mismanagement by this body. From secret pay-outs to victims of sexual harassment, to bloated salaries, to meter hikes that gave no additional promised revenue to schools, these failures have potentially cost our city, and especially our public school children, much needed revenue for services.

Now, a string of emails between the PPA and the School District prove yet again that the PPA is involved in questionable financial reporting and we are going to get to the bottom of this. I intend to use the full authority of City Council to compel the PPA into full transparency and to ensure they answer questions they have been evading time and time again.”

“Let me make this clear: Not only will we make sure not a single cent rightfully owed to our students goes back to the PPA, we are calling for direct oversight of the PPA’s budget to end the financial mess they are putting upon our schools and our city,” she said.

Gym revealed in December that the PPA is demanding a $10.9 million refund on an alleged overpayment to the District back in 2020, while refusing to provide documentation for their accounting error. Gym, the District, and education advocates contested the request and questioned the inclusion of various expenses within the PPA’s On-Street Division, from which revenues to the District are sourced. Dramatically high pension payouts and the existence of a $34 million “trust” to offset post-employment benefits have significantly decreased the funding allocated to schools. Requests for further information were dismissed by PPA Executive Director Scott Petri, who insisted that the District’s inquiries were “premised on [the School District’s] inaccurate understanding of the law.”

“For a cash-strapped District, every dollar matters,” Gym said. “We’re talking about the salaries of over 100 teachers, critical mentors for our students with tremendous needs. The success of our students should come before offering exorbitant bonuses to executives or pension payouts. It’s fundamentally wrong to allow this entity to continue to rob our kids of their needed dollars. This hearing will hold the PPA to account and make clear why advocates have demanded direct oversight and local control over the Philadelphia Parking Authority.”

The Parking Authority has been scrutinized in the past for questionable financial practices since its state takeover in 2004, including in audits by the State Auditor General in 2017 and the City Controller in 2020. However, Gym pointed out that these audits continued to overlook fundamental problems and missed a number of serious accounting concerns most recently revealed in emails between the District and the PPA.

“At a time when the School District is in such dire need of resources, we must ensure they are receiving all available funding,” said Councilmember Mark Squilla (D-1st Dist.).

“In the past decade, the PPA has amassed nearly a quarter billion dollars in revenue each year. Meanwhile, our public schools can barely afford to have full-time nurses during a pandemic. And now they are asking for millions of dollars back from the School District? That’s greed, plain and simple,” said Councilmember Kendra Brooks (At-Large). “It’s time we push for real oversight of the PPA, and for transparency around where their money is going. I applaud Councilmember Gym for taking this essential first step in getting to the bottom of the PPA’s financial mismanagement and ensuring they pay their fair share for our public schools.”