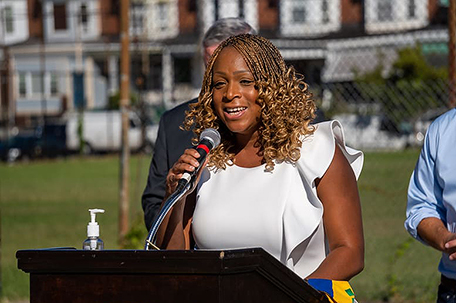 Last week, Councilmember Jamie Gauthier’s bill to protect the University City Townhomes, an affordable housing complex in one of the fastest-gentrifying sections of Philadelphia, passed out of the Committee on Rules with a favorable recommendation.

“With this bill, we can do something different than what happened with urban renewal half a century ago – and ensure there’s housing justice for working-class residents of West Philly well into the future. I’m grateful to my colleagues on the Rules Committee for their consideration and support of this important legislation.”

Earlier this year, the owner of the University City Townhomes notified the U.S. Department of Housing and Urban Development (HUD) that they would not be renewing their affordable housing contract, instead opting to sell the property.

Considering the injustice that this presents – both to the current residents of the Townhomes, and to the former residents of the Black Bottom, a majority-Black community which was razed during urban renewal to make way for a science and technology research campus – Gauthier introduced Bill No. 210778 to enact a ban on any demolition on the site for the next twelve months, as well as a zoning change to RMX-3, with a requirement that apartments be built at 20 percent of area median income for the region.

The legislation is supported by residents of the townhomes and local housing advocates, who testified in today’s hearing.

“We’ve watched this neighborhood continue to be gentrified,” said Aida Smith, a resident of the University City Townhomes. “People want to be in this neighborhood because it’s so close to everything, and it tends to be a safe area. I’m glad Councilmember Gauthier is taking up this bill, and I hope it passes.”

“SLAMS has 22 students that got an eviction notice,” said Timothy Boyle, principal of Science Leadership Academy Middle School (SLAMS). “These 22 students represent six percent of my school, and also represent 48 percent of all the students within my school who live in the neighborhood. There are very few places in the city where so many affordable homes are next to so much economic opportunity, cultural opportunity, educational opportunity. I hope in the near term that there can be justice for the families living in the Townhomes, but also that we can preserve affordable housing right next to some of the greatest opportunities that this city has to offer.”

“I bring unique perspective to this matter because I can personally attest to the commitment that was made to keep this site as affordable housing decades ago and the damage it would do to displace Black Philadelphians from this site for a second time,” said Dr. Walter D. Palmer, founder and president of The Palmer Foundation, Inc.

“Eradicating affordable housing on this site would be a grave injustice on many levels – for the families who live here now, for the Black Bottom residents who were removed once before, and for the future of being a place where working class people can afford to live in a neighborhood where jobs, transit, healthcare, and amenities are all easily accessible.”

“I want to support the Councilmember’s bill and I also want to talk about white privilege, because this is all what this is about,” said Gerald Bolling of the Black Bottom Tribe. “They were trying to buy our homes and put us out for many years. They bulldozed our houses on 36th Street and 38th Street to get us out of there – to build the University City Science Center. So they got us out of there through that tactic, and now they’re trying these tactics.”

Councilmember Jamie Gauthier: an “A” for caring for her district