Councilmember Domb calls for state of emergency declaration in Kensington 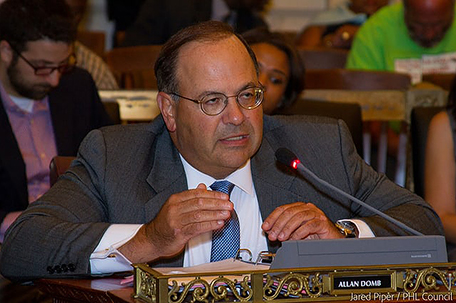 At-Large City Councilmember Allan Domb issued a resolution last week calling on the mayor, governor, and the Pennsylvania General Assembly to use all powers of their offices to declare a state of emergency in the Kensington neighborhood. The order would bring a multi-jurisdictional operation and financial approach to the humanitarian disaster in an area that is home to the worst urban opioid crisis in America.

An emergency declaration would allow the City of Philadelphia to seek available relief resources from state and federal governments through the Pennsylvania Emergency Management Agency and the Federal Emergency Management Agency to address the crisis in Kensington and the 19134-zip code, which continues to lead the city in overdose-related deaths. Over the last four years, the city has averaged almost 1,200 lives lost annually to overdose deaths.

“My colleagues have put a great deal of time and resources into addressing the many complex issues that have consumed Kensington for far too long,” Domb said. “Despite the city’s countless efforts and those efforts made by so many amazing community-based organizations and residents, we must acknowledge that our approach isn’t getting the results Kensington deserves. This has become a disaster area of epic proportions – a disaster that requires relief efforts that far exceed the capacity and resources of City government. This is not a problem created solely by the people of Philadelphia, nor should the solutions fall on our backs alone.”

The neighborhood surrounding the Kensington Avenue corridor has for decades languished under the weight of a thriving drug trade along with criminal activity, violence driven by territorial illegal drug sales, people experiencing substance use disorders, mental illness and homelessness. The streets are occupied with open drug use and littered with trash, dangerous needles, and other toxic waste.

“Kensington is subjected to conditions unimaginable anywhere else in Philadelphia,” Quiñones Sánchez said. “We need all hands on deck at every level of government to support neighbors and families and address this public health and safety crisis with meaningful relief measures, policy change, and restorative community investments.”

If state and federal partners declare Kensington an emergency area, it would allow the city to access resources that will provide hazard mitigation, access to health-related treatments, neighborhood cleanup, remediation, and wraparound social services for neighborhood residents and those experiencing homelessness and substance use disorders.

“We must explore every option and think outside of the box in order to get the Kensington and Harrowgate neighborhoods every possible resource to address the neighborhood issues and the opioid crisis that have arisen because of failed policies that have been allowed to fester for years,” said Councilmember Squilla. “We must do better by our residents and must explore every avenue to help us combat these issues. We are fully committed to addressing our resident’s quality of life issues but require assistance beyond what the city itself can handle.”

City Council’s resolution recognizes the initiatives set forth by the Mayor’s Administration to tackle the ongoing issue.

Councilmembers stand with the Mayor and urge him to support the call to state and federal officials to declare a state of emergency in Kensington.

“We all want to achieve the same goals here, and the time is now for us to take bold, unprecedented actions,” Domb said.

Along with Sánchez and Squilla, the resolution was co-sponsored by Councilmembers Green, Gilmore-Richardson, Parker, Brooks, Bass, Gauthier, and Thomas.