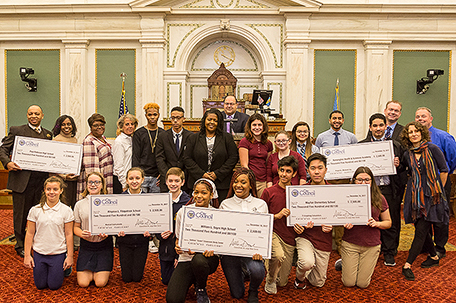 ABOVE PHOTO:  (by Philadelphia City Council)

“Our schools don’t get the credit they deserve,” said Councilman Domb. “My staff and I have visited nearly 40 public schools in Philadelphia since we began this donation initiative and what we find constantly are young people who are engaged and teachers who are working very hard.”

“There’s no lack of interest from our students in learning, but there is a lack in funding, which is why I am happy to be able to help sponsor special projects at each school,” Domb said.

“During this season of giving, we are especially grateful for Councilman Domb’s donation to our school communities,” said Philadelphia School District Superintendent Dr. William Hite. “This generosity will help grant our students access to resources and experiences that will make them well-rounded and engaged learners. We are proud that the positive work being done in our schools is being recognized in such a meaningful way.”

Mayfair Principal Guy Lowery said the school will use its donation to buy new graphing calculators.

Kensington Health & Sciences intends to use its grant for a projector and an upcoming museum field trip, according to Principal Nimet Eren.

Paul Robeson High School for Human Services will use the money for updated video surveillance system. Robeson was named the most improved school in Philadelphia earlier this year, and its principal, Richard Gordon, was just named Administrator of the Year by EducationDive.com, a leading school news journal. Councilman Domb’s friend Max Paul matched his donation to Robeson and also gifted $2,500 to the school.