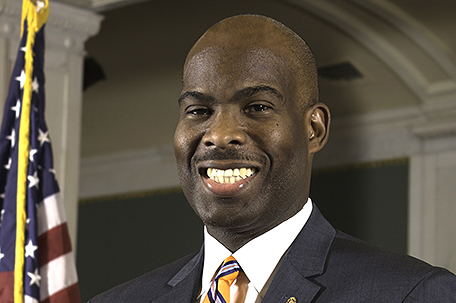 Councilman Derek S. Green was sworn in as Commissioner for the Philadelphia Gas Commission, but more notably, he was elected unanimously as Chair.

On April 7, 2016, City Council of Philadelphia adopted Resolution No. 160254 appointing Councilman Green to serve on the Gas Commission for a term ending January 7, 2020.

Councilman Green was sworn in by the Presiding Commissioner and congratulated by all.  Following the swearing in, remarks were made by fellow Commissioners, and the Chair had this to say about esteemed former Chair and Councilwoman Marian B. Tasco:

“I am honored and humbled to have the support of my colleagues on the Commission, and understand that I have big shoes to fill with the departure of former Chair, and Councilwoman Marian B. Tasco, who I highly respect.”

As the new Chair, Councilman Green immediately conducted the remainder of the meeting.