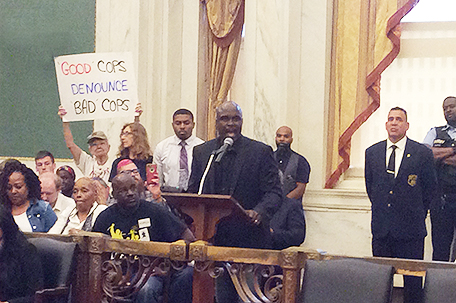 On Thursday, Philadelphia passed a resolution calling for hearings on the Philadelphia Police, and the social media habits of 330 of its officers.

Since the release of the Plain View Project’s report detailing the offensive social media posts of 330 Philadelphia police officers, residents have heard from activists, Commissioner Richard Ross, and even Mayor Jim Kenney.

A group of activists came to City Hall on Thursday to demand that City Council take up the matter before the body went on summer break. Sure, it was good to see governmental bodies Iike the Legislative Black Caucus speak out and Commissioner Ross putting 72 of the 330 officers on desk duty was a good start, but with the exception of Councilpersons Helen Gym, Curtis Jones and Kenyatta Johnson, the silence from the body had been deafening.

“We are here to tell City Council to do its job,” said WURD host Solomon Jones. Jones was among those organizing the gathering which included activists from POWER and the Philadelphia chapter of the National Action Network. “We want them to speak out on behalf of the people. We want to remind them that they work for us.”

By the time that the Council session ended, not only had the body raised its voice, it had also decided to hold hearings on the Plain View study and had introduced a bill that would make it much easier for residents to know if more about how the City spends its money in these matters.

Councilman Derek Green introduced a resolution calling for hearings to get a first hand report from Commissioner Ross and to hear from citizens regarding the Plain View study. “With the city currently gripped by a wave of violence, Philadelphians need to be able to trust the police officers sworn to protect them,” he said.

“Right now, they’re not so sure they can, something that keeps good cops from being able to do their jobs effectively,” Green said.

“Many of my colleagues and I have worked and continue to work with upstanding and committed police officers through programs like PAL and other initiatives,” he said. “However, it is unsettling to know that there are police officers who would make these types of offensive statements who make up many of our communities.”

The hearings will be conducted by Council’s Committee of the Whole and will commence as soon as the Police Department’s investigation into the matter is done, Green said. Right now, the department’s Internal Affairs unit and the law firm Ballard Spahr are looking into the 3,100 posts discovered by the Plain View Project.

In other Council news, Councilwoman Gym introduced a bill that would require the City to disclose any settlement it makes over $20,000 or related to harassment, discrimination or employee misconduct. The City paid out $48 million in undisclosed settlements including $18 million related to police misconduct in fiscal year 2019 and $2.2 million in sexual harassment settlements over the past six years.

The bill was co-sponsored by Councilmen Jones and Johnson and has been referred to committee.

City Council’s next session will be held in September.