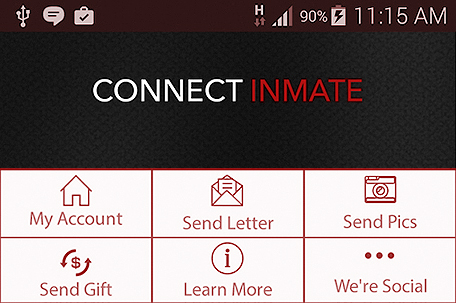 According to the Pennsylvania Department of Corrections, there are more than 50,000 people currently incarcerated in the State of Pennsylvania. African Americans make up about 55 percent of the prison population in PA.

And in a society that is quickly becoming convenience focused, those incarcerated for long periods of time are at risk for losing connection with the outside world, creating more difficult barriers to overcome once released, and ultimately leading to higher recidivism rates.

Connect Inmate is the latest creation by entrepreneurs Blair Sandlain, Carmena Ayo-Davies, Tykeem Williams and Dennis Johnson in an effort to close the communication gap between family’s affected by the corrections system.  This user-friendly app, which can be downloaded to your phone or other mobile device, allows you to send money, photos, and letters directly from your mobile device to loved ones in any correctional facility.   Recipients are freed from the hassle of long waits for mail to be delivered and communication cut short due to time constraints.  Connect Inmate provides a new level of comfort and security for its users.

The app was launched in September 2014, and currently has more than 19,000 downloads. The app is free to download, and only charges $1.50 to send letters, and $.50 for photos. Users simply write a letter or note from their mobile device, and snap a photo. The letter or photo is then printed and sent to the inmate, anywhere in the United States.

Founding partner, Blair Sandlain credits her experience as a teenager with an incarcerated parent as fueling her passion for creating the app. “My father was incarcerated when I was 2 years old, and wasn’t released until I was 17. As a teenager, it became really difficult for me to communicate with him, because I got busy with work, with friends, with life. This app helps people to be able to communicate with their loved ones whenever they want”, said Sandlain.

Connect Inmate help family members and friends avoid the guilt of not being a “good friend” to those who are incarcerated. Today’s fast paced lifestyles often prevent relatives on the outside from sitting down and writing a letter. Connect Inmate alievates that.

“I have a lot of friends from my neighborhood who are in jail. This app is perfect for my lifestyle. I’m always on the go, but I’m always taking pictures, so I can just send them”, said Tykeem Williams is Connect Inmate’s Brand Ambassador.  “When people go to jail they get slighted. Pictures are important because they keep inmates in touch. The photos and pictures help keep them connected.”

While inmates currently receive the letters and/or photos as regular mail, Connect Inmate is working to have the technology actually placed in some correctional facilities in the Philadelphia area. You can download the app for free either from the iTunes app store or Google Play for Android by search Connect Inmate.