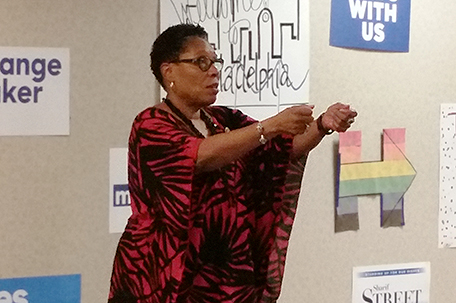 On Sunday, August 28, Congresswoman Marcia Fudge (D-OH) visited the Hillary Clinton for America campaign office in North Philadelphia. A diverse group of around 40 supporters and campaign volunteers was encouraged to register to vote ahead of the October 11 deadline, and to make sure that others did as well. Pennsylvania is a critical election swing state, and the Philadelphia region plays a large part in that.

The assembled group was multi-ethnic; with neighborhood residents, people from other parts of the city, naturalized citizens, millennials and seniors. One of those present for volunteer training was the veteran broadcast pioneer, Marciarose Shestack, a fixture at KYW-TV in Philadelphia and WNBC-TV in New York for over two decades. 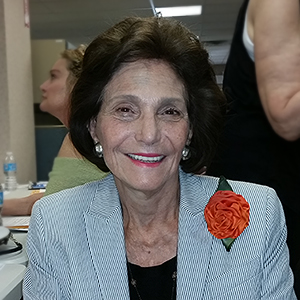 Groundbreaking Philadelphia broadcaster Marciarose Shestack — the first woman in the country to anchor a prime time daily news in a major market — was present as a private citizen to sign up as a campaign volunteer. (Photo by: Amy V. Simmons)

Shestack–who broke another glass ceiling in the 1960s as the first woman in the country to anchor a prime time daily news show in a major market–is volunteering for the campaign as a private citizen out of concern for the future of the country.

“I think that it is one of the most important elections that we’ve ever faced,” Shestack said. “The result can be catastrophic, so it is one we have to take very seriously. The very fact that Hillary is running is so exciting, something that only women resonate with — to recognize that such a qualified woman can run for president. Girls growing up today can say ‘I can do that too!’”

Sharif Street, candidate for Pennsylvania State Senate, representing Philadelphia’s 3rd District, spoke to the group briefly, as did State Senator Dwight Evans. Evans, Democratic candidate for the US House of Representatives and a friend of Congresswoman Fudge, introduced her to the audience. City Council President Darrell Clarke– encouraged everyone present to help Philadelphians turn out in high numbers on Election Day.

Rep. Fudge spoke to the group about Hillary Clinton’s integrity, both as a former colleague, and as a friend. 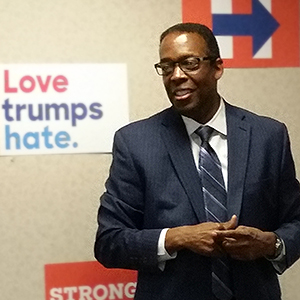 Fudge spoke passionately about the candidate’s faith who understands that she has been blessed in a lot of ways that many Americans have not and that to much is given, much is required. “I feel the same way,” Fudge reflected “I’m a kid who came from a neighborhood where everybody didn’t get out. I’m the one who got out, so it is important to me that I make sure that bring the rest of those kids out.”

Fudge understands that not all the people who support Republican Presidential nominee, Donald Trump, are racists and bigots.

“When you grow up in a neighborhood like mine, where you come out of high school, worked for the auto manufacturers, did something with your hands – those jobs are gone. So they’re afraid of what will happen,” Fudge said. However, she cautioned about the potential consequences of a Trump presidency. She emphasized the vigorous GOTV effort Clinton supporters have to undertake to prevent this.

“We have to find a way; I don’t care what it takes. If we lose this election, we will not recover in my lifetime. If we allow them to turn this whole thing upside down, we cannot recover.” Fudge warned.

In her home state of Ohio, Fudge is feeling confident about a Clinton victory in November.

“She is up about an average of 4 points [in the polls], within a statistical margin of error. I think she is going to win Ohio, because my district, which takes in parts of Northern Ohio, provides about 45 percent of the Democratic vote in the state. I think I can get my numbers up high enough to offset what is going to happen in the southern part of the state.” Fudge said.

When asked about the so-called “Trump Effect” on the down-ballot races which could deliver a Democratic majority to the 115th Congress, Fudge said, “I believe that if Hillary wins the state of Ohio in November by more than 5 points, she’s going to carry everybody with her. If it is less, then I think you might see some split tickets, and maybe a Republican victory here and there.”

In June, Rep. Fudge co-sponsored HR5557 -entitled the Poll Tax Prohibition Act of 2016–introduced into the House by her colleague, Rep. Mark Veasey(D-TX-33). The bill addresses the unfair financial burden that so-called “voter ID” laws place upon potential registrants. The legislation argues that the fee for a government issued ID card is an indirect poll tax. Poll taxes — fixed amounts per person levied on adults and often linked to the right to vote — were outlawed in 1964 through ratifcation of the 24th Amendment and through the Voting Rights Act of 1965.

In Pennsylvania, all voters who appear at a polling place for the first time (including if they have changed addresses since the last time they voted) must show proof of identification.

“In Ohio, technically you don’t have to do it [show ID]. But what they do when you walk into the polls is ask for it [although not required], so it gets people thrown off and afraid, wondering ‘am I doing the right thing, or did I do this wrong?’” Fudge explained. “They change our rules for every single election in Ohio, just to create confusion. That–in and of itself–is a form of voter suppression. So my goal is always to make sure that people know what the rules are.”

Fudge emphasized the effect of one person’s vote upon the entire community.

“We have to understand that it is not just about you. You have to make sure that you get every single person that you find [to register and vote], Fudge said. “There are going to be those that you are going to have to try to convince. If I did not vote, it probably wouldn’t change my life. I am quite comfortable. But it would hurt my nieces and nephews. It hurts my mother, and my aunts and uncles. It hurts people that I love and care about. So why should I be so selfish as to not want to help somebody else?”

She also charged the audience to educate potential voters about the candidates and the issues they as canvas the neighborhood and speak to friends and family.

“We can’t afford to get bogged down [in negative portrayals of Clinton] We have to get out there and tell the positive story. Do your part, and we’ll do our part.”

For assistance, contact the Philadelphia Voter Registration Office at 215-686-1591.