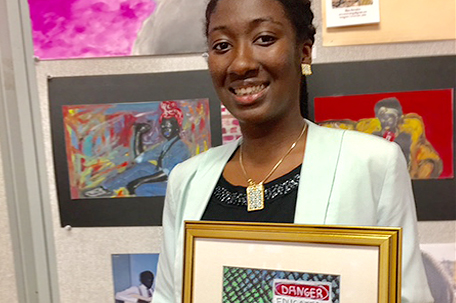 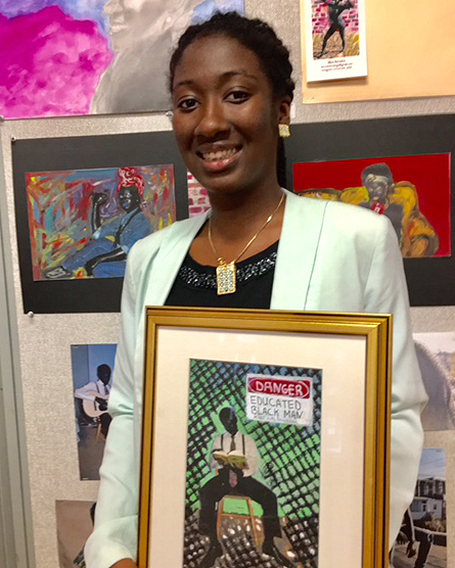 Krouba, who was born in Ivory Coast, Africa, says her mixed media artwork “Warning” was created after she was told she was too dark to be pretty. She says “Warning” expresses the complications of having a dark complexion but also “…focuses on Black people being beautiful, unapologetic, strong, human and educated in our world.”

The artwork presents a well-dressed African American man reading a book. “The book in his hand is a symbol of his education. The fence surrounding him symbolizes the negativity that tries to shun his intelligence. The figure is unbothered by the fence and it seems as if he broke right through it,” Krouba explained.

The piece will be displayed along with the artwork other young winners from across the nation during the ten-month exhibition in the U.S. Capitol. Krouba will continue her studies at the University of the Pittsburgh in the fall as a biology/pre-med major. In addition to being the First Congressional District 2017 art exhibition winner, she is also the 2017 Delaware County Community College art show award recipient.

The art showcase, An Artistic Discovery, provides Members of Congress with the opportunity to present the talents and diversity of creative young artists in their districts for visitors to the Capitol to see.

“These young artists will have their work seen by hundreds of thousands of people from across the country and around the world who visit the House office building and the U.S. Capitol,” Congressman Brady said. “The Capitol exhibition not only encourages young artists, it also makes the overwhelming case regarding the importance of arts education in our schools.”