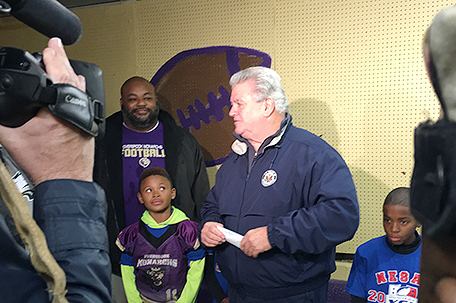 The Overbrook Monarchs football team is on its way to Florida, thanks to a $10,000 check from Congressman Bob Brady.

In a brief ceremony at the Granahan Playground, 6500 Callowhill St., on Nov. 26, Congressman Brady presented a check to Monarchs Founder and President Robert Ford to ensure that the team will be able to compete next month in the National Championship Tournament hosted by the United Youth Football League (UYFL) in Plant, Florida.

The team was fundraising to pay for the trip but Ford said it was a struggle. “Once again Congressman Brady has come through for us. He has been with us from the very beginning.”

Brady says. “The Monarchs are much more than a football team. This is a year-long athletic program that helps young people avoid negative influences.”

Ford, who played football at Clarion University of Pennsylvania says, “Our team coaches are mostly professionals who live in the community and are dedicated to not only the team but to their families as well. And, thankfully Bob Brady has our back. He is our number one supporter.”