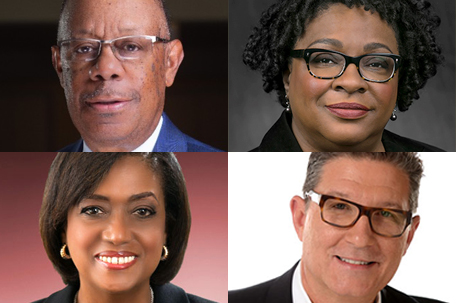 Community College of Philadelphia has announced changes to the leadership of its Board of Trustees. On Sept. 1, Harold T. Epps, senior advisor at Bellevue Strategies, was unanimously elected chair of the College’s Board. Epps, who previously served as vice chair, replaces Jeremiah J. White, Jr., chief executive officer of White and Associates. White served as chair of the College’s Board since 2015.

“The College is pleased to officially announce Harold T. Epps as our new Board chair,” said College President Dr. Donald “Guy” Generals. “Harold has decades of experience leading organizations in both the public and private sectors. I look forward to working alongside him as we continue to move the College forward and find innovative ways to continue to support our students.”

Other members nominated and unanimously elected to Board leadership roles include:

Sheila Ireland, president, and CEO of Philadelphia OIC has been elected secretary.

Rosalyn J. McPherson, president and CEO of the ROZ Group, Inc., has been reelected vice chair.

“The City’s College is a vital cog in the educational ecosystem,” Epps said. “I look forward to helping to ensure that it continues to provide the skills and tools that Philadelphians need for a productive life.”

Consisting of 15 members, trustees are appointed for six years, without compensation, by the mayor of the City of Philadelphia, and are responsible for administering and supervising the affairs of the College. The powers and duties of the Board of Trustees are set forth in Section 19-1905-A of the Pennsylvania Public School Code of 1949.

Throughout his career, Epps has built a solid reputation in both the private and public sectors. While in the private sector, he has focused on positioning organizations for sustained growth while successfully managing change. Publicly, as director of commerce for the City of Philadelphia, he oversaw and implemented policies to help both small businesses and major corporations in Philadelphia thrive. This includes coordinating activities along neighborhood commercial corridors with small businesses and entrepreneurs, major real estate development projects, large-scale business attraction and retention efforts, as well as efforts to increase minority-owned business contracting opportunities.

As a senior advisor for economic development at Bellevue Strategies, Epps continues this work with businesses of all sizes. He lends his expertise to clients through strategic positioning, access to capital, and introductions to his vast network of key stakeholders. In addition, he also serves as a senior advisor with the global search firm Diversified Search, headquartered in Philadelphia.

His commitment to workforce development and business opportunity, as well as diversity and inclusion efforts, continue to drive his civic and board activities. Epps serves on the board of many organizations, including Cobbs Creek Restoration and Community Foundation, Economy League of Greater Philadelphia, Public Health Management Corporation, World Affairs Council of Philadelphia, and as chair of First Step Staffing of Philadelphia.

Epps holds a bachelor’s degree in Business/Commerce from North Carolina Central University, where he was recently honored with the title of Trustee Emeritus and has served as a trustee for eight years. He also holds an MBA from Western New England University.

Additional information on Community College of Philadelphia’s newest Board of Trustees, as well as a full list of trustees, can be found online.