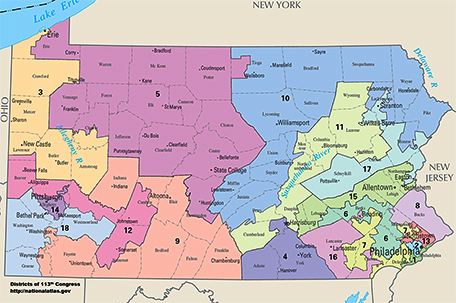 ABOVE PHOTO:  Pennsylvania Dist ricts for the 113th Congress, drawn by the General Assembly in 2011.

The Committee of Seventy is delighted that the Pennsylvania Supreme Court confirmed what the state’s voters sense whenever they enter the booth to cast votes for Congress: Pennsylvania’s gerrymandered congressional map is rigged to deny them fair, meaningful ballot choices.

The crazy-quilt map that Harrisburg gave us in 2011 has made Pennsylvania literally the first chapter in the book on gerrymandering. So, it’s very satisfying to see the state’s high court join the vanguard of reform by declaring extreme partisan gerrymandering to be unconstitutional.

While we understand the court’s urgency to get rid of the terrible 2011 map, we know its order to create a new map in time for the May primary will spawn confusion for voters and for candidates. Seventy, with its long tradition of election education, will do everything it can to help people navigate the chaos and make informed choices in the vital 2018 elections.

Finally, Seventy would like to stress that court rulings like today’s are necessary, but not sufficient to fix the root flaws in the state’s approach to redistricting. This new map will still be produced through a confusing process with little public input amid partisan gridlock in Harrisburg.

What we need before the next regular redistricting in 2021 is what the Fair Districts PA coalition, of which Seventy is a member, has advocated: a fair, orderly, transparent, voter-driven process for determining congressional and state election maps.

Seventy’s Draw the lines initiative, which will put the same mapping software that political operatives use to draw crazy maps into the hands of ordinary voters, aims to create an army of citizen mappers who can do that work in 2021.

The Committee of Seventy is an independent nonprofit advocate for better politics and better government in Philadelphia and the Commonwealth of Pennsylvania. For more information, see www.seventy.org.