Commentary: How does looting equate to mourning a death? 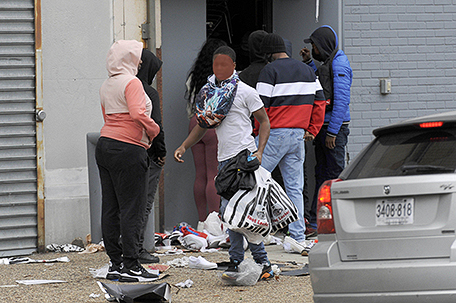 ABOVE PHOTO: People walk out of a damaged store carrying merchandise, Tuesday, Oct. 27, 2020, in Philadelphia after a protest over the death of Walter Wallace, a Black man who was killed by police in Philadelphia. Police shot and killed the 27-year-old Monday on a Philadelphia street after yelling at him to drop his knife, sparking violent protests that police said injured 30 officers and led to dozens of arrests. (AP Photo/Michael Perez)

By the time many Philadelphia Sunday SUN newspaper readers see this article, we’ll be just two days away from November 3 — General Election Day. At a time when everyone who is a registered voter should be focusing on getting out the vote, there are small business owners in Philadelphia, who are struggling just to keep their heads above water thanks to the newest round of social unrest. After the killing of 27-year-old Walter Wallace, Jr. on Monday at the hands of two white Philadelphia police officers, some in our city took advantage of a very sad situation. They chose to go out and steal as much as they could carry from businesses along a number of the city’s business corridors.

On Wednesday, Philadelphia City Councilmember Cindy Bass called an emergency community meeting on Zoom to discuss the latest incidents of looting in these business corridors. The meeting targeted small business owners, business corridor managers, community non-profits and clergy members. “Juggling a pandemic and a major presidential election aren’t enough, oh no. We have to deal with a police shooting and social unrest too”, said Ron Hinton, President of the Allegheny West Foundation, a North Philadelphia-based non-profit.

“We learned this morning that a couple ATM machines along our Germantown Avenue business corridor were blown up overnight so that vandals could clear out all the cash,” said Majeeda Rasheed, a vice president of the Nicetown CDC. “It just doesn’t make any sense”.

“As of 8 o’clock this morning, Game Stop was being broken into again,” said Pat Burns, a longtime businessman in Philadelphia who owns the Shops at La Salle. “Looters broke in there Monday night, and they came back this morning. The Rite Aid Pharmacy at Shops At La Salle is still not reopened from the social unrest and looting that happened back in June. The Pharmacy was being remodeled and hadn’t even officially reopened yet — it was just being restocked, with most of the windows still boarded up. It didn’t matter.”  “My belief is that the people who are doing all this looting are largely not from the city,” Burns continued. “Some of my regular customers have been coming up to our store, (Fresh Grocer), in tears, saying how distressed they are that this looting is happening. I think there’s some coordinated efforts to do a lot of the damage that’s being done. At my Fresh Grocer in West Philadelphia, these guys came into the store with armed guns and blew up the ATM machines inside the store.  That’s a group of individuals from outside the city, that I believe are coordinated. I’m invested in this community. I’m not going anywhere. I’m not walking away. I need everyone’s help and we all need each other’s help.”

“One of the things we really have to do immediately is to spread the message that this is not the way to go,” Bass said. “We are only destroying our own community. For goods and services, we should not have to go out into the suburbs to make our purchases. We should be able to buy what we need right here in our community, along our business corridors and at places like Shops at La Salle. We’ve worked very hard, for example, to have supermarkets in our own neighborhoods. Pat was one of the few people who stepped up to the plate to bring full-service supermarkets into our communities. When we had food deserts, Pat heard our need, and he fulfilled a vision.”

As of press time , it was reported that 90 people had been arrested since this latest round of civil unrest kicked off across Philadelphia and 76 of those arrested were charged with theft or burglary. Thirty Philadelphia police officers were injured during the height of the melee Monday night, including a 57-year-old female police sergeant who was allegedly deliberately run over by someone driving a pick-up truck. The one resonating answer to the “why loot?” question  has been in the form of another question — “What does looting and stealing and destroying of property have to do with mourning another life snatched because of overzealous police actions?”

Guest Commentary: Waking up to the dysfunction, destruction and disheartening acts in America