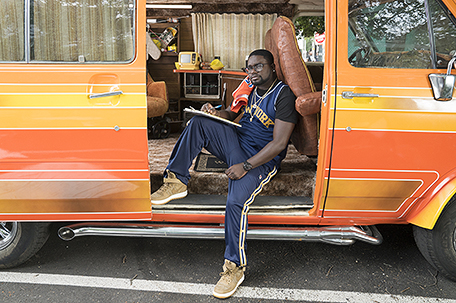 Originally from Chicago, comedian and actor Lil Rel Howery has been making waves in the film and TV world. From playing Robert Carmichael in the NBC comedy series, “The Carmichael Show,” to guest starring as Quentin on HBO’s “Insecure” to his role as the hilariously candid TSA agent Rod Williams in the blockbuster “Get Out,” Lil Rel is becoming a name to know in the industry.

“Uncle Drew” tells the story of Dax, a basketball enthusiast and coach, who drains his entire life savings for a chance for his team to compete in the Rucker Classic streetball tournament. With $100,000 at stake, Dax is at his wits end as his life begins a rapid downward spiral. A chance encounter leads him to meet the street ball legend, Uncle Drew. A road trip ensues as Uncle Drew attempts to reunite his retired geriatric team. Howery shared how the concept for “Uncle Drew” came together.

“It stems from Kyrie Irving,” Howery said. “He came up with the Uncle Drew character, which is actually based on his dad.  His dad still plays ball, he’s an older guy now. Kyrie started doing Pepsi commercials as Uncle Drew. I think people forget, the first few commercials Kyrie did it where he showed up to a real basketball court and the people didn’t know that he wasn’t old… so that drew me in.”

“ I think I thought it was James Harden at first,” Howery continued. “Then I figured, he’s not shooting with his left hand, I don’t know who this is… it was Kyrie.  He was able to have these popular Pepsi commercials and eventually he was approached and asked if he wanted to do this as a feature film. They figured it out and we’re here today.”

Howery describes his character Dax as “the coach, but Dax is also the hustler too. Once he meets Drew and the rest of the guys… that ends of changing his whole outlook and how he saw everything.”

Additionally, Howery had a very unique opportunity to work with a truly dynamic cast, which included some of his basketball heroes.

“From Shaq to Lisa Leslie to Reggie to Chris to Nate Robinson… Aaron Gordon, Nick Kroll, Tiff and Erica Ash… this was a great group!” Howery said. “I’m always excited when I see the billboards and the posters with all of us on there. It’s something beautiful about that to me. I mean a lot of times, if you do look at posters it’s usually like the first two names… but this is a whole team effort and that’s what we did. It was so much fun! It’s still surreal. I’m still pinching myself because I’m a huge basketball fan. I got to see Reggie Miller come off a pick in person and hit a three-pointer… it’s insane!”

If the admiration of the players and nostalgic value wasn’t enough, the camaraderie on set added to the overall fulfilling experience for Howery during the filming. He spoke about the most rewarding aspects of the movie , which he described as the conversations that took place off camera.

“Like I said, I’m a big basketball fan,” Howery said. “So to hear the players give Kyrie advice, hearing them tell all these stories, answering any question I’ve ever had… I’ll value that for the rest of my life to be honest with you.”

Howery has no signs of slowing down with quite a few other projects on the horizon. He also plays Reggie in “Tag,” currently in theaters, will star in “The Bobby Brown Story” on BET this fall, and in“Birdbox” with Sandra Bullock, which is set to be released in December of this year. His main focus, however, will be his starring role in the upcoming Fox sitcom “Rel,” which is based on his life and set to premiere in the 2018-2019 season.

“Once “Uncle Drew” is out in theaters and the press run is over with, I’m just going to focus on “Rel” and making 13 hilarious episodes!” Howery said.

Ultimately, “Uncle Drew” is a story about reuniting with one’s passion. At the heart of the movie is a redemption story about overcoming obstacles no matter how monumental, fighting for your dreams and the true meaning of family. There are hilarious moments, moments that will pull at the heartstrings, and several breakout performances that are sure to positively surprise audiences! “Uncle Drew” hits theaters nationwide on Friday, June 29th. Check your local listings for showtimes.

A new look at “Uncle Tom”