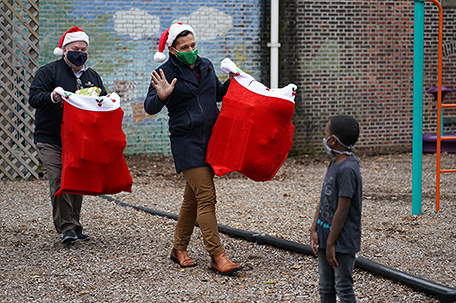 More than 70 students who have been receiving virtual school instruction at the Shane Victorino Nicetown Boys & Girls Club (B&GC) were surprised with an early Christmas celebration on Friday.

Students from the North Philadelphia neighborhood were greeted first thing in the morning with mounds of Christmas presents, donated by Comcast NBCUniversal. The surprise delivery, made possible thanks to a few of Santa’s Elves, was broadcast live on NBC’s “Today” show.

The holiday fun continued throughout the day as students were treated to a “Best Christmas Ever” holiday party, centered around the movie “Elf.” American Movie Classics (AMC) and Comcast screened “Elf” simultaneously on various screens throughout the center, provided games and activities as well individualized packages of candy and treats.

“These kids haven’t had the opportunity to be kids these past few months, and now that we’re in the holiday season, we want to remind them of the good things that happen in life,” said Lisabeth Marziello, co-CEO, Boys & Girls Clubs of Philadelphia.

The Shane Victorino Nicetown Club, which has been designated by the City of Philadelphia as a city Access Center, has shifted its operations from after-school care to in-school-time programs to give kids a safe place to log onto school if their parents or guardians have to go to work during the day.

Since the start of the pandemic, local the local B&GC affiliate has helped also helped feed more than 176,000 kids across the city.

On Friday, it was also announced that four of the Philadelphia Boys & Girls Clubs that are currently set up as Access Centers, including the Nicetown location, will be upgraded to Comcast Lift Zones, which means these centers will now be receiving even stronger Wi-Fi support for free.

The Christmas present donation and holiday party celebration was meant to provide both B&GC club staff and the students they serve with some relief and cheer as they come to the end of a difficult year brought on by the COVID-19 pandemic.