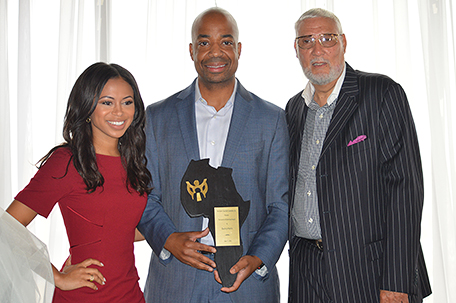 For 29 years, the Father’s Day Rally Committee has put the spotlight on Philadelphia’s fathers.

As he walked away from the group of men with whom he had just participated in the Father’s Day Rally Committee’s group portrait on Monday, the man looked back with a smile.

He was walking down the Art Museum steps as the photographer was setting up the Committee’s annual photo commemorating the group’s week of Father’s Day activities when portrait organizer Mannwell Glenn called out to him.

“Are you a father?”, Glenn asked. “If you’re a father, you need to get over here. You need to be in the picture too!”

He then walked over and took his place among the 50 men gathered for the portrait. It was a mix of men that included politicians dressed in suits and ties (City Councilmen Curtis Jones and Derek Green), labor leaders (Samuel Staten Jr.), broadcasters (Quincy Harris, host of Fox-29’s The Q Show, WURD’s Vincent Thompson and WRNB’s Mannwell Glenn), and FDRC founder Bilal Qayyum, who wore a “Jobs, Not Guns” t-shirt in the photo.

The smile on the man’s face as he walked away was contagious, as were the positive vibes he was feeling.

“This is beautiful,” he said. “This is just so beautiful.” 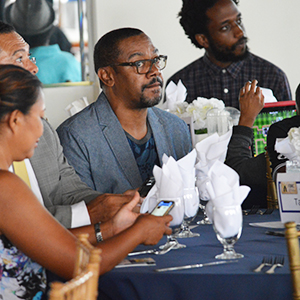 Beautiful moments that put Philadelphia’s fathers in the spotlight are the stock in trade of the Father’s Day Rally Committee. Created in 1989, FDRC’s mission is to promote and honor the men who are taking care of their families, and by extension, their communities.

The photo shoot was the beginning of a week of activities that included the organization’s Annual Awards Ceremony at The View on North Broad Street on Wednesday night. Honorees included Samuel Staten Jr., educator Sharif El-Mekhi, Mel Wells of One Day At A Time, and local rap artist Freeway. A 17-year-old who has just graduated from high school was also honored for being a successful parent while also being a successful student.

The SUN was on the Art Museum steps as the FDRC took it’s annual Father’s Day portrait. Afterward, we spoke with Bilal Qayyum about the importance of recognizing fathers for being a stabilizing force for their children and by extension their communities, how the presence of fathers could solve some of the city’s more intractable problems, and the importance of the father/daughter relationship.

SUN: Hi, Mr. Qayyum, and thank you for your time. How long has the FDRC been doing this?

BQ: This is our 29th annual celebration of fatherhood in the City of Philadelphia.

SUN: What impact do you believe you’ve had over those years?

BQ: When we first started 29 years ago in the city, people talked about fathers, but not at the level they’re talking about them now. So we really feel great and we feel like we’re a part of creating this fatherhood movement in the city, particularly in the African-American community.

Our picnic every year was growing, now there’s less folks coming out because everybody’s celebrating Father’s Day; they’re taking their fathers out to dinner, they’re doing different stuff. Now you can go through Fairmount Park, there was a whole lot of picnics going on and they all have banners hanging up that say ‘Happy Father’s Day!’ You didn’t see that in the City of Philadelphia. So we take credit for that.

SUN: The joke you hear from fathers is that Father’s Day doesn’t get the recognition that Mother’s Day does because Moms have better publicists. But recognizing fathers is important. Why do you believe that is?

And another thing I talk about is that fathers are so important in terms of their relationship to their daughters. Because the father is the first image of a man to a woman. So, if the daughters don’t have a positive image, they can end up dating or getting involved with men who are not good men. So while we always hear about fathers and their sons, it’s just as important for the fathers to be in their daughter’s lives as it is their sons.

SUN: Right now, Philadelphia is undergoing an epidemic of gun violence. The Father’s Day Rally Committee has been working on anti-violence efforts for years. What part do you think that fathers can play in making things better?

BQ: We do work in the juvenile justice center once a week. And when we interview the young men, unfortunately, most of them don’t have a father in their lives. So this whole issue about fathers not being there is true. So they’re not getting the male image and the male support that they should get in the community. A lot of the violence, most of the [people doing the] shootings and most of the folks getting killed are Black males, unfortunately. If you did a profile on who’s doing the shooting and who’s getting shot, most of them have not completed high school and most of them don’t have a father in their lives. So that’s how important [having access to fathers] is to reducing gun violence. It’s have a positive male presence in the household, and if not in the household, with the children in the community.

SUN: Do fathers approach you about the work that you do and the impact it’s had on their lives, and if so, what do you hear from them?

BQ: We hear a lot from them. On Wednesday, we had an awards ceremony where we honored fathers. A lot of the fathers we honored in the past came up to me and said, ‘Bilal, it’s so important that you recognized me, because I’m out here doing the work that I should be doing anyhow, we’re clear about that, but I’m glad that someone recognized us as being important in the life of my family as well as my community.’

SUN: One of the prevailing myths about Black fathers in particular is that they’re deadbeats that spend no time with their children. This is in spite of studies from both the Centers for Disease Control and the Pew Center for Research that show that Black fathers are the most active in their children’s lives. Why can’t we seem to shake this myth?

BQ: It’s society’s images. Every time you see a Black male in the news and stuff, he’s usually portrayed negatively. Somebody’s shooting someone in a shootout, or somebody’s stealing. So that’s the negative image you see in the news media. Very few people saw that Pew report.

But the men you saw out here tonight, they’re involved in their children’s lives. Men are doing it every day; we just don’t get that recognition. And that’s how come the Father’s Day Rally takes on the role of presenting positive images of Black men every day, especially Black fathers.

SUN: Thanks so much for your time, Mr. Qayyum. I really appreciate it.

If you’re interested in finding out more about this year’s FDRC events, go to the group’s Facebook page or call 215-696-5392.