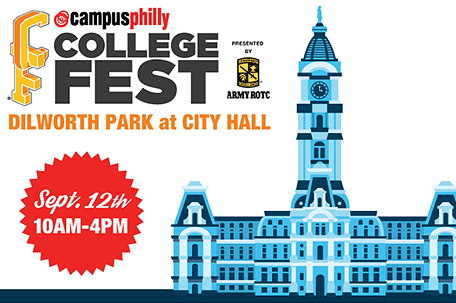 On September 12, nearly 5,000 college students will gather at Dilworth Park for CollegeFest, the all-day welcome event for students produced by Campus Philly in collaboration with the City of Philadelphia and presenting sponsor Army ROTC. For many students, CollegeFest will be their first introduction to the city they now call home, and the enormous popularity of the event reveals the extent to which college students want to embrace Philadelphia as a significant part of their college experience.

Going to CollegeFest introduced me to the city and all that it had to offer. Part of the reason I chose to go to school here was because of the access to Philadelphia, and going to CollegeFest made me feel like the whole region can be part of my campus, said Miljenka Sakic, a recent graduate of Temple University.

CollegeFest is a win-win for everyone involved. Students are eager to get off-campus, and were eager to introduce off-campus opportunities so the students really feel like exactly what they are: the citys newest residents said Deborah Diamond, President of Campus Philly.

CollegeFest 2015 features local and national exhibitors who will have samples, special offers, games, and giveaways; pop-up performances from cultural partners participating in Campus Phillys Open Arts program on the Kimmel Center Stage; and free all-day access to ride the Philly PHLASH, the downtown bus loop with stops at 22 of the citys most popular attractions and cultural institutions.

The all-day festival also includes free admission to museums along the Benjamin Franklin Parkway and in Historic Philadelphia, including Eastern State Penitentiary, The Franklin Institute, Philadelphia Museum of Art, Kimmel Center for the Performing Arts, The African American Museum in Philadelphia, Rodin Museum, National Constitution Center, and the Philadelphia History Museum.   CollegeFest is produced by Campus Philly, a nonprofit organization that connects students to off-campus experiences from arts and culture to internships and jobs, in collaboration with exclusive partners Billy Penn, ISEPTAPHILLY, Capital One 360, Kimmel Center for the Performing Arts, IKEA, AT&T, SALT, and the City of Philadelphia. The festival is free to attend.

For The Love Of Philadelphia