College graduate who battled hunger and homelessness meets the U.S. Senator who helped him keep food on the table 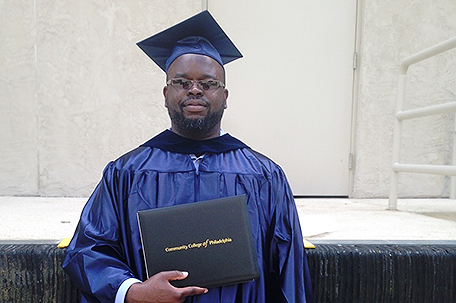 “If we make cuts like this, in my judgment, I hope I don’t offend someone in either party, you do rob people. You rob children of basic food security. You will rob children of basic health care. You don’t help the rest of us along the way. There is no fiscal justification for those kinds of cuts. They are damaging to all of us. They diminish all of us.”

Seated in the audience was Quaris Carter, a student at Community College of Philadelphia who has been both homeless and hungry at times. Afterwards, Sen. Casey met and spoke with Carter, who told him that his efforts to promote food security make a difference to Philadelphians struggling to stay in school, pay for rent and food, and obtain a college degree.

“For me to actually meet a senator in person, it showed that he actually cared. I actually felt empowered, more than just reading a book or article about him,” Carter explained after the event. “I was telling him that by him providing funds pertaining to food, it actually enabled me to have the basics that helped me concentrate more on the academics. Food. Shelter. Clothing — these are all essentials. “Once I had the food, the shelter, and the clothing, I was able to concentrate on my academics.”

Carter shared some good news with Senator Casey: he would be among the 2,376 candidates for graduation at Community College of Philadelphia’s Commencement on Saturday, May 3. Carter, who has a 3.2 grade point average, is planning to transfer to La Salle University, where he has received a scholarship.

The recent increases to the Pell Grant, which Sen. Casey also supported, offered support along his educational journey, as did the College’s new Homeless Student Support Project, which helps those facing homelessness or unstable housing situations. Carter currently survives on roughly $8,000 a year, money he receives from the federal Pell Grant and student Work Study programs.

Sen. Casey and Carter  discovered that they shared yet another important connection. When Sen. Casey taught fifth grade in North Philadelphia, he used to ride SEPTA’S Route 33 bus, which carries people in the neighborhood to work, shopping and places that prepare them to lead better lives.

Sen. Casey made note of that as he accepted the Becker Award and discussed a few of the insights gained while riding the bus. One night, he watched a woman lug five to six bags of groceries onto the bus, and began to understand that — in this neighborhood — public transportation serves as a lifeline.

“It was one of those moments when you have an insight you didn’t have before. I thought to myself, that is how she can get the groceries. Without that bus, she can’t provide for her family. Then you begin to think of the other implications. That is how people get to work. So I learned a lot about this city and its people by riding the 33 bus.”

Turns out that is the same bus route that Quaris Carter now takes to get to his college classes.

“I especially was impressed when he talked about riding the 33 bus because that’s what I ride to get to school,” Carter said later.

Sen. Casey, for his part, praised the work of America’s community colleges, which offer students from all walks and stages of life opportunities to gain marketable skills and prepare for transfer to four-year institutions.

“Community College of Philadelphia is one of those institutions on a statewide basis that we take for granted. What happens here, the higher learning, the workforce development and skill development, that is such a substantial part of our economy. The American economy will only be as strong as our community colleges.”