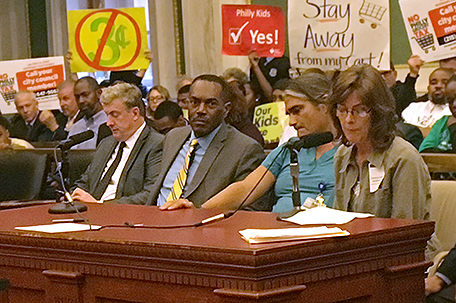 ABOVE PHOTO:  Minister Rodney Muhammad, president of the Philadelphia NAACP (center) and Dr. Steven Larson, assistant professor of Emergency Medicine at the University of Pennsylvania Medical School, were among the people testifying in favor of Mayor Jim Kenney’s proposed soda tax during Wednesday’s public hearing in City Council Chambers.

During a public hearing at Philadelphia City Council Chambers on Wednesday, both sides of the Sugary Drinks Tax debate came to make their views known to council members and tell them exactly what’s at stake.

It was a case of Dueling Signs at Philadelphia City Council chambers on Wednesday as people on both sides of the Sugary Drinks Tax debate came together for a public hearing.

The three-cent-per-ounce tax, which is one of the pegs of Mayor Jim Kenney’s first City budget, has been the subject of debate since it was introduced. On one side, soft drink bottlers, convenience and grocery store owners and union members concerned about jobs. On the other, parents, teachers and doctors concerned about health.

Three council members—Councilman Al Taubenberger, and Councilwomen Maria Quinones Sanchez and Jannie Blackwell—have already come out against the tax, promising the No Philly Grocery Tax Coalition, a group of anti-tax protestors, at a pre-hearing protest that they’d find another way to fund the things the tax is designed to take care of like neighborhood schools, universal pre-kindergarten, and improvements to the city’s recreation centers.

“You continue your fight,” Quinones-Sanchez said. “And let me tell you, Council can come up with other ways to do the right thing.”

That sentiment was echoed by most of the anti-tax people who testified at the hearing.

By passing this sugary drinks tax, Council could possibly undo a lot of the positive work that’s been done in the area of the city’s food deserts, said Lorelei Mottese, Government Relations director for the Wakefern Food Corporation, owners of several of the City’s ShopRite and Fresh Grocer stores. Charging people more for sodas and other sugary drinks might impact other grocery purchases, she said.

“Imposing a tax like this has the potential to undo all of the positive work that ShopRite, The Fresh Grocer, and the community have accomplished,” Mottese said. “Our customers won’t just stop purchasing the newly taxed items in the city, they will simply stop purchasing many food items at grocery stores in Philadelphia. We understand and respect the intention of the bill, however, this is not the right vehicle to achieve those goals.”

Besides, a reduction in sugary drink consumption will impact how much the tax actually earns for the city, said Joel Naroff, president and chief economist for Naroff Economic Advisors, Inc.

“My research indicates the proposed tax on sugar-sweetened beverages will not come close to yielding the funds the Mayor has forecasted and that are needed to adequately fund Pre-K programs,” Naroff said. “The Mayor’s estimates don’t consider the impacts on restaurant sales strategies or avoidance activities that will result from the outsized tax increases.”

But when it comes to new revenues for Kenney’s proposed programs, a sugary drinks tax is the least intrusive, said Steve Wray, executive director of the Economy League of Greater Philadelphia. While the tax is an imperfect one, it’s imposition might make Philadelphians become more creative when it comes to their beverage choices, he said.

“This is a targeted tax on a discretionary set of products with available substitutes,” Wray said. “The sugary drinks tax is likely to have minimal short-term impact on the City’s business climate while it helps to advance crucial investments in education and neighborhoods.”

It’s an investment that some businesses are willing to make. Benjamin Miller, owner of South Philly Barbacoa, testified on behalf of the tax.

“The community allows me to be in business,” He said. “So I support things that will be good for the community. People will continue to buy sodas.”

While three prominent Council members have already promised to vote no on the tax, those in support of it believe they’ll get the nine votes they need to pass it in the end, said Minister Rodney Muhammad, president of the Philadelphia NAACP.

No date has been set for a Council vote on the proposal.