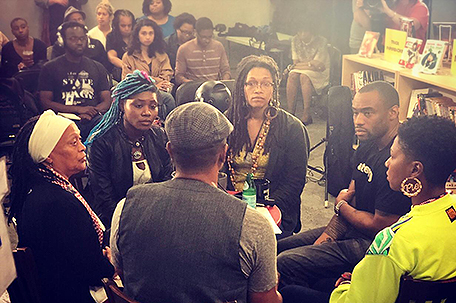 The green and white emblem that decorates the outside of over 27,000 Starbucks franchises worldwide has become synonymous with socializing. Morning rituals, introductions, business meetings, catching up with friends and first dates all frequently happen over a cup of Starbucks coffee.

In April, Philadelphia made national headlines when a Starbucks manager called the police on two African-American men minutes after their arrival, in response to their request to use the bathroom. Their controversial arrest, fueled by baseless accusations and overtly implicit racial bias, ignited feelings of outrage throughout the country.

In response to the firestorm, Starbucks closed nearly 8,000 stores throughout the country for racial bias training on Tuesday. Simultaneously, several Black coffee shop owners gathered in the city for a live-streamed conversation entitled “#CoffeeWhileBlack: A Roundtable Discussion,” which was aimed at redirecting the focus to the support of the countless Black-owned and-operated coffee shops throughout the country.

Konte — who served as the organizer of the event — devised a plan to use the momentum of the Starbucks controversy for a greater purpose.

“Right after the incident at Starbucks, Shoppe Black and other organizations put out a list of alternatives to Starbucks and really it was done as a way to not just boycott a business, but to promote Black owned coffee shops,” he said. “That grew and grew and there were a lot of people shouting us out and lifting us up, because we[Red Bay Coffee] are one of very few Black coffee roasters in the country.”

“We started getting more press, and when Starbucks said they were going to close for training, the question came up… ‘Is this just for show?’ and ‘Are they really going to be about trying to make a change?’, Konte continued. “So basically what we did was utilize that opportunity of the spotlight to shine more light on all the different shops not just here in Philadelphia but around the country.”

Johnson shared her enthusiasm about not only participating in the conversation, but about her business hosting the dialogue.

“We were reached out to by Essence and Red Bay Coffee and it was really cool,” she said. “We’re still a new shop — two and a half years, so not long — but we were really excited to host the conversation because it something that happened in Philadelphia and this conversation has been going on for a while. It was an honor just to be included.”

“Especially as a space where our whole mission statement is built on inclusivity and creating a safe space for folks…  specifically for us on the comic book side,” Johnson continued. “Women, people of color and queer people have often been marginalized in those spaces despite the fact that we all read comic books. As a Black woman who’s been very aware of that… when you go into a lot of comic book stores there is this very White, heteronormative gendered male spaces and you can feel unsafe.”

“With the Starbucks thing, you know Black bodies are policed, but this kind of realization that even in spaces where you’re meant to just sit, we’re not allowed to sit and exist, despite the fact that it’s what everyone else is doing,” Johnson continued. “That reinforces for me the need for a place where people can come and be and not have to explain why they’re there… you’re allowed to be here.”

The conversation was candid and passionate, beginning with the acknowledgment that there are still so many spaces that do not allow Black people to exist, without their presence being perceived as a pending threat.

This begs the question… what are the solutions?  Is the solution more protests? More boycotts? What should we do next?

Marc Lamont Hill offered this perspective. “It’s not just about the protest, although the protests are important,” he said. “A boycott is a strategy to get an outcome… ‘I’m going to do this until you do that.’ But what are we going to [do] — boycott Starbucks until White supremacy is over? Until White people stop calling the police on us? For me, sometimes it’s not about having a protest strategy, but having a reinvestment strategy. Because to me the most beautiful thing that happened after Starbucks wasn’t people saying boycott Starbucks, they were saying ‘we ain’t got to boycott Starbucks… we could just go to Amalgam.’”

A theme that was interwoven in the conversation was the need to be intentional with our spending, and the importance of making a conscious effort to support Black-owned businesses with ethical business practices.

“Everything at Franny Lou’s is local, relational, organic and full of love,” said Blew MaryWillow Kind . “We have high end organic products, so it’s very hard just to get — fair trade black teas. I try to hold my other Black-owned businesses accountable as well, and be like ‘Where are you getting your sugar?’ ‘Are you guys getting slave labor sugar?’”

“We can get relational trade sugar,” Kind continued. “So, even the farms that we’re getting our stuff from are Black-owned. We also need to make sure were supporting the farms, families and communities we’re getting our stuff from. And yes, I’m paying $70 for a 50 pound bag of sugar that you can get for $25 at the street, but you have to make those financial sacrifices to do good work.”

“Aesthetics are key, and so is having quality information so that people are well-informed. We’re trying to really dig deep and understand the attitudes and behaviors that lead to the success and failures of Black- owned businesses,” Lewis said. “How do we get people to support them?” How do we change the PR for Black businesses globally?”

Lewis and her husband continue to do diligent work in that area and will be launching a kickstarter campaign in August for “Black August” so they can launch the largest global directory of Black-owned businesses to date.

One conversation is not going to change the dynamics of a country built on White supremacy, but with each conversation centered around solutions, we are able to make progress in the right direction. Pam Africa offered the following sentiment as food for thought,

“You’ve got to be consistent and persistent,” Africa said. “Sometimes when we had an event there would be thousands of people, sometimes there would be five… so you keep moving and when people come back you’re not in the same place you were before.”

#CoffeeWhileBlack was an essential conversation because it clearly expressed the importance of supporting Black owned businesses.

This happens first through the practice of going to places where Black people are welcomed… not tolerated on occasion with a list of contingencies. The fact that in 2018 people have to be instructed on how to be kind, fair and respectful to their entire customer base, is reason enough to reevaluate current spending practices.

Money is a powerful tool…  one that requires deliberate thought about where to spend it. Shop Black, and support initiatives like Shoppe Black by spending in safe places that need and welcome you.

Being Black (and wanting a cup of coffee) in Philly