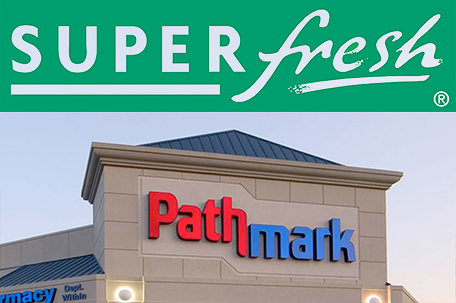 The A&P supermarket chain filed for bankruptcy in July. This was the second bankruptcy filing by the company in just five years.  A&P owns Superfresh, Pathmark, and Food Basics grocery stores in the Philadelphia area, but in total has 296 locations in the Northeast.

The company has $2.3 billion in debts and $1.6 billion in assets, according to various reports.

According to the A&P’s bankruptcy documents, the company has already arranged for the Tier I locations, or the 120 “most profitable and marketable ‘core’ stores” to be divvied up among ACME, Stop & Shop and Key Food. Their Tier II locations, which consists of 151 “non-core” stores have been made available for sale to other interested parties. And the remaining Tier III locations, which are the 25 stores that “have negative profitability and negative lease value” are set to be closed. Those locations apparently include the Franklin Mills, Columbus Boulevard, and Cottman Avenue Pathmark Grocery stores. Neither of these locations are listed for sale nor have potential buyers.

Some of the region’s stores that are scheduled to be sold to Acme include the Superfresh at 180 W. Girard, and the Pathmark at 7700 Crittenden Street, as well as Pathmark’s Wynnewood and Gladwyne locations. However, both of A&P’s Food Basic locates (in NE Phila), as well as several other Pathmark & SuperFresh locations (including Aramingo Ave, Chelten Avenue and Cheltenham Avenue Pathmarks) are all still available for purchase to the highest bidder.

Most of the residents affected by the closings will adjust, and either relocate to a competitor, say ShopRite for example, or start shopping at the new Acme. But far too many residents affected by the Grays Ferry and Glenwood closings really don’t have any other options. The Grays Ferry neighborhood had made some headway in its fresh food offerings to residents when a Bottom Dollar grocery store opened there in 2013, the store closed in 2014 after its parent company, Delhaize America (which also owns Food Lion and Hannaford), sold all 66 Bottom Dollar locations to the Aldi grocery storechain.  Both neighborhoods will once again be considered food deserts after the closings, with no major grocery stores in the area.

The question for these neighborhoods should be, how can any neighborhood in Philadelphia become a food desert, especially considering that we just spent $14 million to light North Broad Street? While City Council has been focused on attracting five-star hotels and department stores into Center City and redeveloping Market Street, our neighborhoods have been neglected. This is despite the gradual increase in the median income in these neighborhoods because of high levels of redevelopment over the past few years. Why is there no campaign to attract grocery stores into the city? Why is there no campaign to attract new grocery stores into the city? And what can residents do to combat this?

Although it may be hard to fathom the inability to obtain quality groceries, especially when you can just drive to the local Trader Joes or Whole Foods, the book “Our Black Year” by Maggie Anderson, humanizes the issues around food deserts. This book chronicles one Chicagoan family’s attempt to only buy from black business. In the book Anderson discusses the huge challenge her family faced when it came to groceries. Although there was a time when there were many black grocers, there was only one black owned grocery store in Chicago when the family started their journey. Before the end of the year, that store was closed.  Unfortunately, the family was then forced to eat lots of canned goods and subpar produce for the remainder of the year. Raising two young girls, this worried Anderson. Were her children getting the necessary vitamins from canned mandarin oranges?

Many of the residents living in the areas where A&P grocery stores are closing will be forced to do the same if a buyer doesn’t step in soon to replace these stores.

This, however is not an issue you see among other races. We are, however, living at the mercy or will of others. Allowing them to control, to a huge degree, what we eat, from where, how fresh it is, and to what degree it is hormonally modified. It’s really time we stop waiting for someone else to do it. Even our elected officials neglected to make this a public issue, campaigning or lobbying for replacement grocers. But can you really blame them? WE didn’t make it an issue.

If members of the Black community don’t take a stance soon and begin to identify ways to provide the necessities of life for our families, unfortunately, we may find ourselves in a similar situation, a day late and a dollar short again, in the near future.