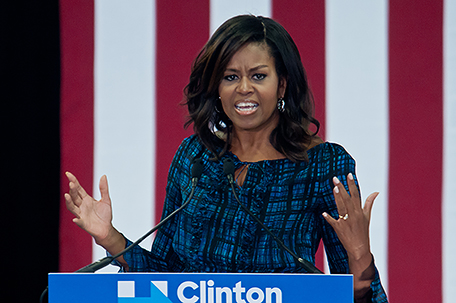 First Lady Michelle Obama came to LaSalle University on Wednesday to ask Pennsylvanians for their help in getting her husband’s former Secretary of State the nation’s first female president.

As they stood in the Tom Gola Arena at LaSalle University waiting for First Lady Michelle Obama to take the stage at Wednesday’s campaign rally for Democratic presidential candidate Hillary Clinton, the young women from the Philadelphia High School for Girls were easy to spot.

Dressed in yellow t-shirts, sweatshirts and the white polo shirt that’s part of the school’s uniform, the young women talked amongst themselves and patiently stood in the auditorium, occasionally dancing to the music piped into the hall.

When she came to Philadelphia last week as part of her outreach to young voters, Clinton was originally supposed to speak at Girls High. But since it was a little too big of a venue, the event was moved to the Temple University’s Mitten Hall, said Parthenia Moore, the school’s principal.

So to make up for that, the Clinton campaign invited the entire school —1,000 students, plus all of Girls High’s faculty and staff—to LaSalle. It took a little doing, but she managed to get everyone together.

While this was an historic event, it was also a chance for the women of Girls High to get more of an understanding of one of our obligations as citizens, Moore said.

“For young women to experience this is important,” she said. “I wanted them to understand that they have a role, an obligation and a constitutional right to be a part of the [electoral] process. Girls High is 168 years old, and we graduate students who are leaders, and who understand their role as leaders in the community.”

That understanding of one’s place in electoral politics was the one that Mrs. Obama was in town to tap into as she campaigned for Clinton and urged people to register to vote through the campaign’s IWillVote effort. The goal is to register 3 million voters nationwide.

Campaign officials are also hoping that the popular First Lady, nicknamed “The Closer” for her ability to sway voters to her husband, President Barack Obama, can work her own special brand of Black Girl Magic on Pennsylvania voters. Right now, polls in Pennsylvania, one of 11 swing states, show the race between Clinton and Republican Presidential candidate Donald Trump tightening.

So, in a year where cynicism and a perception that one’s vote doesn’t count threatens to rule the day, it’s important to understand just how much your vote does count, Obama said.

“Elections are not just about who votes, but who doesn’t,” Michelle Obama said. 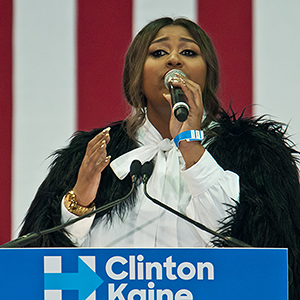 “That’s especially true for young people. In 2012, voters under the age of 30 provided the margin of victory for Barack in Florida, Ohio, Virginia, and Pennsylvania. Without it, he would have lost those states, and he would have lost that election, period, end of story.”

“Barack won Pennsylvania by 300,000 votes,” Obama continued. “That sounds like a lot of votes, but it was #17 votes per precinct. That’s how elections are won and lost. Each of you here in this auditorium can swing an entire precinct and help Hillary win this election by getting yourselves, family and your classmates out to vote.”

“While the stakes are high whenever America goes to the polls to elect a president, the stakes are especially high this year,” Obama said. Having been the First Lady for the last eight years, she’s seen just how tough a job being president is, and the decisions that one has to make in the job. While presidents surround themselves with some of the country’s brightest minds, and takes the advice of those people into consideration, the buck stops with them, she said.

Because of this, it’s important to have someone in the Oval Office that’s going to understand that every decision they make impacts not only the United States, but also the rest of the world.

After some of the revelations made by Republican presidential candidate Donald Trump during Monday night’s debate, it’s clear that Clinton is the best choice for the job, Obama said.

In a position where your words can cause the economy to crash, wars to start, and mayhem to ensue around the world, a steady personality is needed, she said.

Donald Trump’s tendency to pop off disqualifies him, Obama said.

“We need an adult in the White House,” she said. “The presidency doesn’t change who you are, it reveals who you are, and so does a presidential campaign. If a candidate is erratic and threatening, if a candidate traffics in prejudice, fears and lies on the campaign trail, if a candidate thinks that not paying taxes makes you smart, or that it’s good business when people lose their homes. If a candidate regularly and flippantly makes cruel and insulting comments about women, about how we look and how we act, well, sadly, that’s who that candidate really is and what kind of president they’re going to be. They’re not going to change once they get into office.”

“For me, it’s very clear,” she continued. “There’s only one person we can trust with that responsibility, one with the right temperament to handle it. And that’s Hillary Clinton.”

If elected, Clinton would be one of the most qualified people to hold the office, Obama said. She’s been more exposed to the presidency than most and her lifelong record of public service, she wouldn’t have to learn on the job.

“She’s the real deal,” Obama said. “She’ll be able to be an outstanding president for all of us. I’m inspired by her consistency, her guts and her lifelong record of public service. [The presidency] is not a reality show. It’s not an apprenticeship. So as you prepare to make this decision, ignore the chatter and the noise and ask yourself which of these of these candidates has the values we all share. I’m going to work as hard as I can to get Hillary Clinton elected president so that we can keep moving our country forward.”

The last day for Pennsylvanians to register to vote in the November elections is Oct. 11.

For apathetic Dems, Obama offers himself as motivation