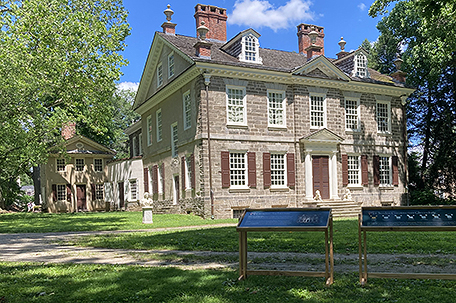 Black laborers, some enslaved, some free, as well as British troops and Continental soldiers have trod the grounds of Cliveden, 6401 Germantown Avenue in the past. This coming Monday, January 16, the Martin Luther King Day of Service, Cliveden will open its five-and-a half acres to the whole community from 10 a.m. to 4 p.m.

“We’re inviting our neighbors in for free activities ranging from writing poetry to playing video games,” Victoria Best said, 43, Cliveden’s community engagement coordinator and owner of  VUOTS (Victoria’s Urban Outreach Tutoring Service). VUOTS, in partnership with Global Citizen 365 and Cliveden of the National Trust will be offering refreshments. “Guests at the event can enjoy a free bag lunch.” Best said.

Cliveden, built in the 1760s by rich Quaker lawyer Benjamin Chew (1722-1810), was once a destination for Philadelphia’s crème de la crème. “Cliveden was a summer home that let the Chews escape from the heat and threat of Yellow Fever in Old City,” said Carolyn Wallace, 38, Cliveden’s education director. “The Chews also had more than nine plantations in Pennsylvania, Delaware, and Maryland.”

The house boasts such masterpieces as a high-style Philadelphia sofa from the 1770s upholstered in yellow silk, a desk made of Cuban Mahogany, and crown moldings in the rooms. “You knew you were somewhere when you were ushered into Cliveden,” one historian said.

Profits from the family’s plantations and other businesses allowed them a lavish lifestyle. However, enslaving Black laborers meant running a risk, points out a scholarly article, “Violent Resistance on a Delaware Plantation, 1792-1800,” by Phillip Seitz and John Reese. In the summer of 1795, George Ford, a plantation overseer, wrote in alarm to his boss, Benjamin Chew, saying, “…I am In danger of my life being taken by the neagroes,” Ford wrote, describing an uprising. “Last thursday evining I was beatin by Clubs till I was blody as a bucher…”

Cliveden’s Black history began receiving more attention with “Emancipating Cliveden,” a project completed in 2012, Wallace said. “People knew about the fight on Cliveden’s grounds during the Battle of Germantown in October of 1777 because of the reenactments held here. But we wanted to tell all of Cliveden’s stories and that includes its African American history. Our tours started covering not only details of Cliveden’s architecture and furnishings, but stories about people who lived and labored here over the site’s 200-year history.

Cliveden has gone a step further with “Illuminating Hidden Lives: Black Stories of the Mid-Atlantic Region” funded by the National Trust for Historic Preservation’s Interpretation and Education Endowed Fund, Wallace said. “The Chew Family papers some 230,000 documents, are housed at the Historical Society of Pennsylvania. The papers include correspondence, account books, receipts and plantation records. They’re being digitized to make them available for research. Members of the African American Genealogical Group are helping to interpret these documents,” Wallace added. A YouTube video, “Finding Black Families: Stories from the Chew Family Papers “: https://www.youtube.com/watch?v=9HJTs5qCaBs, highlights research techniques and some of the stories.

For example, a ledger entry for April 9, 1803, mentions “Cash expended in hunting for Tom [an enslaved Black man].” The name Tom comes up again, a genealogist notes in the video. Sometimes one plays detective, trying to puzzle out if it’s the same person, she adds. An entry on June 9, 1803, cites, “Cash expended in hunting for Negroes in Philadelphia and New Jersey.” These entries suggest resistance to slavery and perhaps the Black community’s aid to freedom seekers. To learn more about the project and current findings visit https://cliveden.org/illuminating-hidden-lives/.

While Cliveden’s residents in the past have ranged from enslaved Black people to British troops, on Monday VUOTS and Cliveden’s staff hope to welcome lots of families. “Barbers will give free haircuts, and a hair stylist will also provide services free of charge,” Best said. “A notary will help people get their documents in order. Say, you’re a parent who wants to work with notary. You can do so while kids play games on Gametron, a truck with video games inside.”

Guests will have a chance to explore their creative side,” Best said. “You can paint on canvas or write poetry. “We’re also going to honor Yaasir Workman,” she said, speaking of a 13-year-old youth born with a chronic kidney disorder. “He’s often unable to attend school, and he’s had a lung transplant, yet he’s remained enthusiastic about life and learning.

Cliveden looks forward to opening its gates to the public on Monday. We’ve partnered with community groups in the past,” Wallace said. “For example, we’ve provided space for Mt. Airy Learning Tree to hold classes. We’re happy to host this MLK Day event with VUOTS, and we’re eager to have the community come and enjoy the activities. We hope they’ll return for a tour in the spring.”