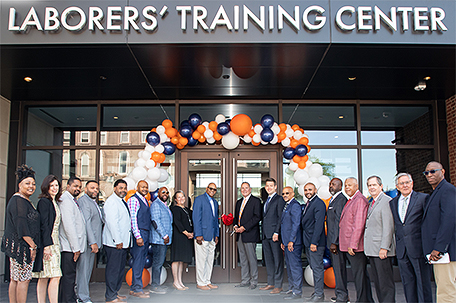 The new headquarters for the Laborers District Council hopes to be a place where Philadelphians can get the education they need to participate in the building trades.

When the former William Penn High School closed in 2010, the North Broad Street building was knocked down by Temple University, its new owners.

While people had an idea that part of the land was going to be turned into fields for Temple’s soccer and field hockey teams, they didn’t know what was going to be done with the rest of it.

In June, the Laborers District Council opened a brand-new building at 665 N. Broad St., and while it most likely will never be filled with teenagers, in a way, the area is still a school.

Originally, the District Council was considering buying a portion of William Penn High School, but decided against it after finding out it would cost less to build something new than it would to fix up, said Sam Staten Jr., business manager for Laborers Local 332.

When Temple tore the building down, the Laborers negotiated for the land and eventually bought it, he said.

The building, which is named after Staten Jr., includes a lecture hall, board rooms, meeting rooms, a terrace and two kitchens, he said.

But while he was happy and moved that his colleagues thought enough of him and of his work to name the building after him, he felt that focusing on just him told an incomplete story, he said.

“I know I’ve been around for a while and I’ve constantly tried to do the right thing for people, but this isn’t a one-person thing,” Staten said.

“I need the history to show that it was more than one person, and I wanted to honor people while they’re still alive. This Isn’t a one-man show here. This is a team.

The building also includes classrooms that will allow instruction in a variety of things, said Ryan Boyer, business manager for the Laborers District Council.

“It’s designed to train our craft laborers,” he said. “There’s two tracks of formalized training that are exclusive to union members. We’re also going to be housing the Sam Staten Sr. pre-apprenticeship program so that we can diversify Philadelphia’s unions.”

Among the ways that they intend to do this is by helping people master the apprenticeship tests that all unions have, Staten said.

“It’s going to be a little bit of everything,” he said. “We’ll be getting young people prepared to go into the trades. Not just our trade, but any trade. All of the building trades have signed off on this.”

“We’re also trying to get the School District [of Philadelphia] to get the trades back into the schools.

These programs are vital to keep kids from going out into the streets. It’s worth the money to give these kids some hope. If you ask a kid to spend an hour extra to take up a trade, they’ll do it.”

Thanks to a president that’s union-friendly and stimulus and infrastructure dollars coming in, the state of the labor movement, at least in Philadelphia, appears strong, Boyer said.

In a city where finding a job can sometimes be tough, that’s good news.

“We can address some of the structural unemployment issues and provide opportunities for people thanks to the Infrastructure program,” he said. “It provides people with the hope that you’ll have an opportunity if you do the right things.”