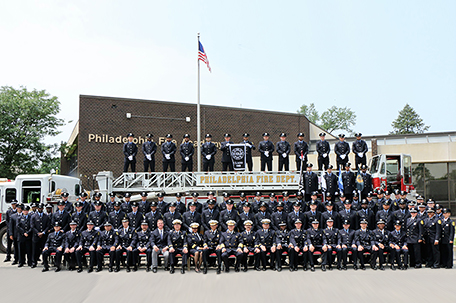 Philadelphia’s newest firefighters were sworn in last Thursday at a joyous graduation ceremony filled with friends and family.

The event held at Community College of Philadelphia marked the end of months of rigorous training for the members of Class 195 — and the beginning of their lives in public service. Fire Commissioner Adam K. Thiel promised they would have challenging, but rewarding, careers.

“These cadets have committed to risking life and limb for folks we don’t even know,” Thiel said. “How many organizations can you call where … they will truly risk their lives for yours? I can’t think of many. And that is a sacred duty.”

Class spokesman Matthew Cohen said members of the 1-9-5 came from different backgrounds and took a while to bond as colleagues.

“We all went from being individuals, to becoming a team, and now — here in front of you today — as a family,” Cohen said. “When the pressure was on, we showed up. … I feel that we are more than prepared to hit the field.”

One graduating cadet was unable to attend because he is on a military deployment to Africa. He sent his classmates a video message that was played at the ceremony.

Deputy Chief Girten Allerton, who heads the Fire Academy, wished the cadets well with a traditional phrase firefighters use when leaving each other’s company: “Be safe out there.”

Want to become a Philadelphia firefighter? Apply by July 26! Go to: https://phila.peopleadmin.com/postings/59942.