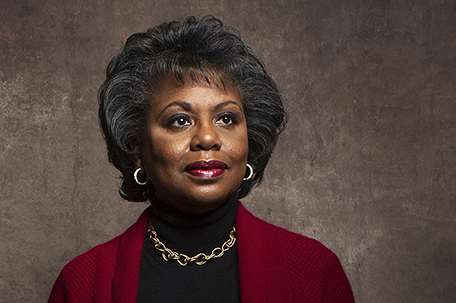 Anita Hill is a renowned attorney, author and professor, whose testimony during the 1991 confirmation hearing of U.S. Supreme Court nominee Clarence Thomas made sexual harassment in the workplace a national issue. In 1997, Hill published her autobiography “Speaking Truth to Power” and in 2016, actress Kerry Washington portrayed Hill in an HBO adaptation of the book titled “Confirmation.” Hill is leading “Restoring the Vision,” a project to revive awareness of Title IX, the crucial law mandating equal education and employment opportunities for women. Hill is a University Professor of Social Policy, Law, and Women’s Studies at Brandeis University and a faculty member of Brandeis’ Heller School for Social Policy and Management.

Mindy Kaling created and stars in the critically acclaimed television series “The Mindy Project,” in which she also serves as lead writer and executive producer. She is the author of two New York Times bestsellers “Is Everyone Hanging Out Without Me? (And Other Concerns)” and “Why Not Me?”. Kaling also starred as Kelly Kapoor on the Emmy Award-winning comedy “The Office”, and was a writer on the show.

One of the world’s greatest soccer players, Abby Wambach, holds the world record for the most goals in professional soccer, male or female, and led the United States in scoring in the 2008 and 2011 Women’s World Cup tournaments. Since retiring from U.S. Soccer, Wambach has championed a new cause: pay equity for women.  Her first book, “Forward: A Memoir,” will be released in September.

Adam Grant, the Wharton School’s top-rated teacher, has been recognized as one of the world’s 25 most influential management thinkers, one of the 100 most creative people in business and one of the 40 best business professors under 40. Grant serves on the “Lean In” board and wrote a New York Times series on women and work with Sheryl Sandberg, including “Speaking While Female” and “Madam C.E.O., Get Me a Coffee.” Grant was recently named one of the “Best Philadelphians 2016” by “Philadelphia Magazine”.

This year’s conference also features several other local speakers and native Philadelphians, including: Laura Vanderkam, author, “I Know How She Does It: How Successful Women Make the Most of Their Time”; Paige Wolf, author, “Spit That Out!” and owner, Paige Wolfe Media and Public Relations; Kristen Chase, online media personality, social media consultant, author, and founder, Motherhood Uncensored; and Darlene Cavalier, founder of SciStarter, senior advisor at “Discover Magazine” and member of the EPA national advisory council for Environmental Policy and Technology.

“We are so excited to welcome Anita Hill, Mindy Kaling, Abby Wambach, Adam Grant and other members of our community as speakers for this awe-inspiring day,” said Leslie Stiles, Board President of the Pennsylvania Conference for Women. “Attendees will learn to advocate for change on behalf of women in every aspect of their lives.”

The 13th Annual Pennsylvania Conference for Women will host 8,000 attendees for a full day of networking, inspiration, professional development and personal growth. In addition to a standout lineup of keynote speakers, the nonpartisan, nonprofit Conference will feature breakout sessions led by experts in the fields of business, philanthropy, health, finance, media and professional development.

“Beneficial is delighted to be a presenting sponsor at this unique gathering that creates the opportunity for women to come together and be champions for change,” said Joanne Ryder, Chief Administration Officer for Beneficial Bank. “From the keynotes to the breakouts and networking opportunities, attendees will come away with the tools to impact their workplaces, their communities and their lives.”

Registration is now open for the Conference. To register or learn more about the event, visit www.paconferenceforwomen.org.

A Perfect Ten: The 10th Anniversary of the Pennsylvania Conference for Women was probably it’s most unforgettable