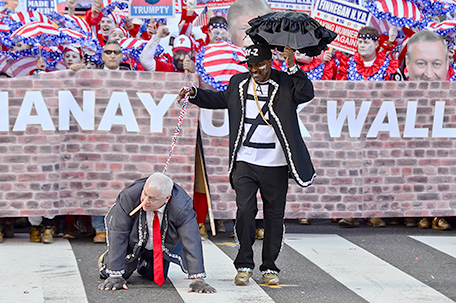 ABOVE PHOTO: The controversial skit shown above during the 2019 Mummers parade. (Photo: Bill Z. Foster)

On Wednesday, the City of Philadelphia issued the following statement about the 2019 Mummers Parade:

“From the beginning of the Kenney administration, the City and the Philadelphia Commission on Human Relations have provided the Mummers with extensive consultation and trainings on diversity, inclusion, and cultural appropriation to prevent racist and bigoted performances from being a part of the parade.

To participate in the parade, each group’s theme is required to be pre-registered and approved by Mummers leadership with input by the City. It is the role of Mummers leadership to monitor groups on parade day to ensure participants act in an unbiased and non-discriminatory manner, as set forth in the Mummers’ own guidelines.

“In this particular instance, the Finnegan group submitted its concept in advance of the parade, representing to both the City and Mummers organization that the performer portraying Jay-Z would be an African-American male and would not be dressed in blackface.

The Finnegan group says that it complied with its theme application. The City condemns the use of blackface in any form and will continue to work with the Mummers to ensure future performances are nondiscriminatory.”