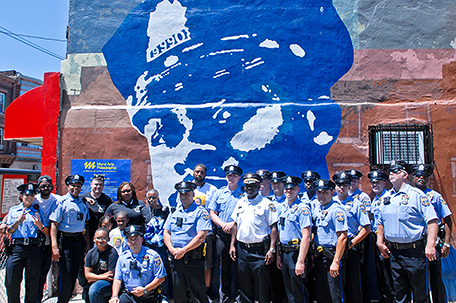 “The Corner” is the second iteration of a community mural honoring Sergeant Wilson, designed by artist Felix St. Fort and painted with help from the Restorative Justice Guild. It is just one component of a broader plan to revitalize the 29th and Ridge business corridor that was initiated by Clarke and Mural Arts in March of 2017, and now counts the Commerce and Streets departments and Strawberry Mansion Community Development Corporation as partners.

“I am honored today to pay tribute to a heroic public servant, Sergeant Robert Wilson III, and to note with joy in my heart that his memory will be a blessing on the Strawberry Mansion community,” Clarke said. “I am grateful to Mural Arts and to our project partners for investing their time and resources into this historically significant commercial corridor, and for working with us toward a brighter, safer future for all who live and work here.”

“Through public art, we come together as a community, and we shape our identities as neighbors and friends. Commercial corridors serve double duty as cultural hotspots, full of small business and gathering places, and they’re perfect for public art,” said Jane Golden, executive director of Mural Arts Philadelphia, the lead overseer of the project. “We are so grateful to the Council President for his vision and for appreciating the value of murals and the impact they have on communities.”

“The Corner” is located within visual distance of an existing community portrait of Sergeant Wilson and was created with the collaboration of local residents. In order to pay further tribute to Sergeant Wilson and to the Strawberry Mansion neighborhood, additional investments and improvements will be made to this high-traffic intersection, with the goal of spurring economic growth. 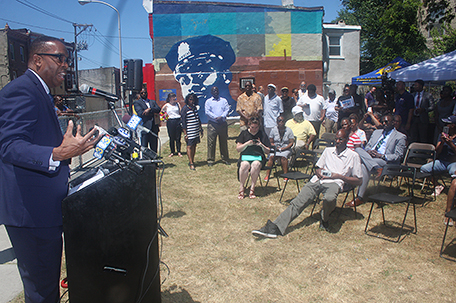 “29th and Ridge is a bustling intersection that connects many people to different areas of the City using various modes of transportation,” Streets Commissioner Williams said. “The Streets Department is proud to showcase our efforts to clean and maintain safety on this corridor. This is the first location where the City is piloting solar panels to energize the bus shelters, and we are happy to work with Council President Clarke on this project.”

“The Department of Commerce is driven by our commitment to supporting commercial corridors throughout Philadelphia like Ridge Avenue,” said Karen Fegely, deputy commerce director for the Office of Neighborhood Business Services. “We are proud to have been a part of this project and look forward a continued partnership with the neighborhood’s stakeholders on future economic development efforts.”