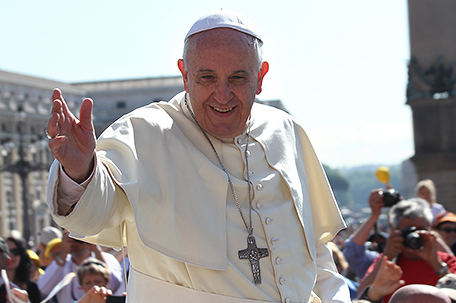 “The neighborhoods in Center City Philadelphia will be most impacted by the World Meeting of Families – Philadelphia 2015 and the Papal Visit, but the entire city has the opportunity to participate in this historic event,” said Mayor Michael A. Nutter.  “I am asking Philadelphians who are not already joyously anticipating the arrival of Pope Francis to get excited and get involved.  This is an incredible moment for our City and the Nation.”

Pope Francis’ schedule for Philadelphia is as follows:

7:30 p.m. – Festival of Families on the Benjamin Franklin Parkway (This event is open to the public.)

4:00 p.m. – Papal Mass on the Benjamin Franklin Parkway (This event is open to the public.)

A detailed itinerary for Pope Francis’ September 2015 Apostolic Journey to the United States of America is available online athttp://www.usccb.org/about/leadership/holy-see/francis/papal-visit-2015/2015-papal-visit-schedule.cfm.

Road closures, parking restrictions and changes to public transportation routes and public works services will be necessary during the Papal Visit.  The public’s cooperation and patience in abiding by these restrictions is appreciated.

Parking restricted areas will be posted with “Emergency No Parking” signage.  Fencing, other physical barriers and uniformed law enforcement officers will also be utilized to enforce vehicle restricted zones.  A map of the restricted areas in Center City is available on www.phila.gov.

Beginning at 10:00 p.m. on Thursday, September 24, the following secure vehicle perimeter will go into effect:

N 16th Street from Callowhill Street, over I-676 (Vine Street Expressway) to the East Bound Lanes of Vine Street

to the Hahnemann Hospital – Drexel University College of Medicine

Cherry Street between N 21st Street, past N 23rd Street to the River

N 6th Street just south of Callowhill Street to the structure supporting I-676 and over to the area of Randolph Street, Vine Street and across N 5th Street

S 9th street from between Spruce Street and Cherry Street

The below road closures will begin on Friday, September 25 at 10 p.m., until Monday morning, September 28:

I-95 northbound and southbound exit ramps to Callowhill Street

I-95 northbound and southbound exit ramps to I-676

The below road closure will begin Saturday, September 26 at 10:00 a.m., until late Sunday afternoon, September 27:

U.S. Route 1 in both directions from U.S. 30 to Belmont Avenue

Guide to Pope’s visit to Philadelphia