City honors family of Fairmount fire with unveiling of exhibit 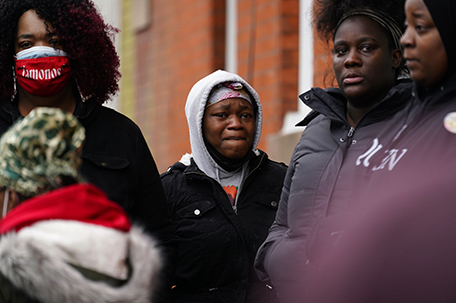 ABOVE PHOTO: People gather near the scene of a deadly row house fire, Wednesday, Jan. 5, 2022, in the Fairmount neighborhood of Philadelphia. (AP Photo/Matt Rourke)

The City of Philadelphia has opened a temporary public exhibit called “Angels – A McDonald Family Tribute” to honor the 12 members of the McDonald family who tragically lost their lives in one of the deadliest fires in Philadelphia history. The exhibit is presented by the City’s Office of Arts, Culture, and the Creative Economy (OACCE) in cooperation with the Office of the Mayor and surviving McDonald family members and is open to the public through March 31, 2023.

The exhibit is located on the second floor of City Hall. It includes photographs, video, toys, books and other memorabilia, as well as a painting of the deceased by artist Taqiy Muhammad entitled “869 Angels.” The number “869” refers to the address in the Fairmount neighborhood where the family lived on North 23rd Street between Poplar and Parrish Streets. The painting was part of the tombstone unveiling event on the one-year anniversary of the tragic fire.

“Since that horrific day, the entire city continues to mourn for each of the young mothers and children lost. We mourn everything they should have been able to become and experience, and the tremendous pain felt by their families and communities,” said Mayor Jim Kenney. “We want to honor these precious lives by saying and remembering their names, and by paying tribute to each of them.”

For the past year, Vanessa and Estelle McDonald — the surviving immediate family members — have been on a journey of reflection and grief. This exhibit, which they have co-curated, is part of their healing process and is a testament to their strength and endurance as a family.

“What I would like for everyone to know is that they will be forever missed and loved, and we will continue to let their names and souls live on forever. We haven’t lost them to just memories – what we’ve gained are angels,” said Estelle McDonald, only surviving daughter of Vanessa McDonald.

On January 5, 2022, Vanessa McDonald lost three of her daughters and nine of her grandchildren. Estelle is the lone surviving daughter.