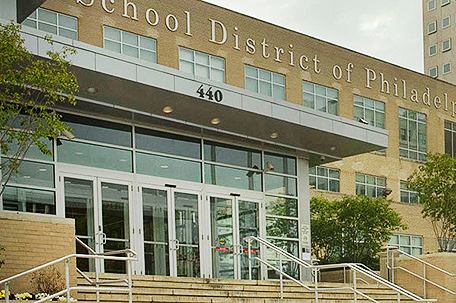 “School officials and Philadelphia officials have been united in calling for predictability and long-term sustainability in funding for the district. This legislative package is a significant step toward stabilizing the School District of Philadelphia, which will allow students and teachers to return 100 percent of their focus back to learning,” Philadelphia City Council President Darrell L. Clarke said. “These measures simply require that the state allow Philadelphia to raise local revenues for our schools. I thank our state Delegation leaders in Harrisburg for their balanced, bipartisan approach toward resolving the Philadelphia School District’s funding emergency.”

The legislation introduced by Philadelphia City Council and the Philadelphia Delegation permanently dedicates a portion of Philadelphia Sales Tax revenue to schools and provides a new, recurring funding stream to address the City’s $5 billion unfunded pension liability. The Pension Fund was 47.4 percent funded in FY13, down from 48.1 percent funded in FY12, despite increased contributions from the City to make up for lower-than-expected revenues.

“Kicking the pension can down the road has led more than a dozen U.S. municipalities to declare bankruptcy since 2008,” Council President Clarke added. “This collaboration between City leaders and the state Delegation will help Philadelphia to resolve its fiscal challenges and enhance core services for all residents.”

”For the last year, the Philadelphia Delegations along with the Mayor and City Council have worked toward a long-term, fiscally responsible solution for both funding our schools and addressing the City’s long-term fiscal health,” said Rep. Cherelle Parker, leader of the Philadelphia Delegation. “The elected officials of Philadelphia are united in seeking to resolve two of the biggest challenges facing our Commonwealth and nation: basic education funding and pension deficits. The successful enactment of the legislation we are proffering will help to ensure a better future for our children and working class families. I look forward to working with my colleagues on both sides of aisle on this responsible funding approach for our schools.”

“After many conversations with the Mayor, President Clarke and legislative leaders, there are several items that need to get addressed in Harrisburg by June 30th,” said Sen. Vincent Hughes, Minority Chair of the Senate Appropriations Committee.  “First is the need to pass the cigarette tax that City Council has already approved, which would drive over $80 million of new local dollars to the Philadelphia School District. Second is to secure more state funding for the School District and entire state, which is where the deepest cuts have occurred. The third is to address the maintenance of effort issue. The fourth is to provide assistance to the City’s pension fund problem. Legislation in Harrisburg is under discussion to address all of these items.

“It is a positive step that Philadelphia City Council is moving forward on authorizing the $120 million for the School District through the 1 percent sales tax, which was approved in Harrisburg last year,” Sen. Hughes continued. “The Republican majority in Harrisburg has already said that they are looking for the implementation of this to occur as they consider these other items.”