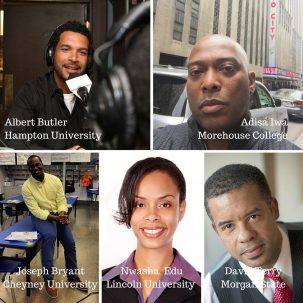 as “The Philadelphia Juneteenth Festival”

Black Colleges Matter: Adisa Iwa–Morehouse College graduate and screenwriter/producer for multiple hit television shows including Law & Order: SVU, NYPD Blue and Dark Angel–joins Albert Butler, former WURD AM radio host and journalist, and other Historically Black College and University (HBCU) graduates to celebrate the history and significance of education for African Americans since the civil war. This conversation will also examine the historic partnership between African Americans and Quakers in the establishment of these institutions such as the Institute for Colored Youth, known today as Cheyney University; and their current struggle for survival:

“Every year we engage the community in a conversation that focuses on a relevant and pressing social issue. This year we want to highlight HBCUs. The Johnson House has a unique connection to Cheyney University. The abolitionist Johnson family were active in many aspects of black life post the civil war and funded a variety of causes: Israel H. Johnson was a donor and manager of The Institute for Colored Youth that was disbanded to create what is now Cheyney University… like the Johnsons, Johnson House Historic Site continues to be a beacon of light for critical social and civic issues. Johnson House has been a safe place and remains a relevant safe heaven for the community to have these discussions.”
-Cornelia Swinson, Executive Director, Johnson House Historic Site

Mrs. Ena Lindner Swain is this year’s recipient of the Unsung Hero Award for her accomplishments as an African American businesswoman owner, researcher, historian, and community activist working to improve area schools and recreation centers.

The panel and award ceremony will take place during a pop-up beer garden from 5:00 p.m. to 8:00 p.m. on June 18, 2016 at the Johnson House Historic Site, 6306 Germantown Avenue. Interested attendees should register here .

FREE AND OPEN TO THE PUBLIC Johnson House’s Juneteenth festival is a day-long festival celebrating the the passage and ratification of the 13th Amendment; commemorating the end of slavery.

Juneteenth Festival features a kids zone with face painting and balloon artist, food trucks, exhibits, historic re-enactments, and a parade depicting the history of the anti-slavery and abolitionist movements that led to the celebration of freedom today. Additionally, there will be health & resource fair, vendors and live entertainment.

The parade kicks-off festivities at 10:00 a.m. at 5109 Germantown Avenue at the State Marker commemorating the site of the writing of First Protest Against Slavery of 1688, the first anti-slavery documents ever printed, at the corner of Germantown Avenue and Wister Streets. From there, a “Freedom Walk” parade will march up Germantown Avenue to the Johnson House to kick off the festivities. Daytime festivities end at 4:00 p.m. For a complete listing of events, visit johnsonhouse.org .

Johnson House Historic Site is a house museum and Center for Civil and Social Advocacy that represents what everyday people have done and can do to make a difference in their community and beyond. The example of partnership—between Africans seeking freedom and the abolitionist Johnson family—serves as a catalyst to inspire, uplift and empower current and future generations. Johnson House accomplishes these goals by creating interactive educational opportunities, fostering community initiatives and preserving the historic integrity of the house, grounds and outlier buildings.